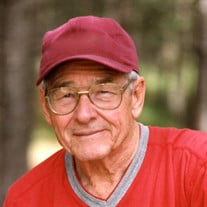 TRAVERSE CITY — Lewis Morris “Louie” Kemp, 89, of Traverse City, beloved father and friend passed away on Saturday, Sept. 27, 2014, at Cherry Hill Lodge. Louie was born on Oct. 7, 1924 in Princeton, Kentucky to the late Burtis and Katy Mable (VanHooser) Kemp. During his childhood and adolescence he lived in Lincoln Park, Michigan, graduating from high school in 1942. As a young patriot he joined the Army Air Force in 1943, and served in the 8th Air Force (493 Air Group, 861 Squadron) in World War II. Louie was a ball turret gunner flying 33 missions over occupied Germany, earning him the air medal with four leaf clusters for meritorious achievement. He served his country proudly and was honorably discharged in 1945. In 1945 he married Phyllis Jane Brooker. Together they raised their two daughters, Cathy and Beth. Following his military service he became a firefighter for Wayne County, Michigan, and retired after 22 years. He was active in the FFAA, NRA and the VFW. During his retirement his hobbies included making custom fly-fishing rods and fly tying. Louie was an expert fly fisherman and loved the Manistee River. He so loved the great outdoors. Louie is survived by his daughters, Cathy (Bill) Juergens, of Chambersburg, Pennsylvania, and Beth (Tony) Brolick, of Elk Rapids. He was a proud “Gramps” to two grandsons; three granddaughters; 10 great-grandchildren; brother, William (Evelyn) Kemp and a half-brother, Dennis Mitchell. He is preceded in death by his parents; sister, Pauline Schermesser; half-brother, Jack Mitchell. His was a Life Well Lived. He often expressed how “blessed” he was to be living the life of his dreams living in his little cabin in the woods enjoying God’s bounty. In honor of our father’s wishes there was direct cremation. A memorial celebration of a Life Well Lived will be held at a time and date yet to be determined. The family would like to thank the staff of Cherry Hill Lodge, and Hospice of Michigan for the loving care they provided for Louie. Arrangements for the family have been entrusted to Reynolds-Jonkhoff Funeral Home and Cremation Services.

The family of Lewis Morris Kemp created this Life Tributes page to make it easy to share your memories.