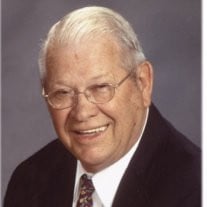 Lewis Elsworth Williams, 85 of Traverse City passed away peacefully on Wednesday, October 9, 2013 at his home with his loving wife at his side. Lewis was born on February 10, 1928 to the late Clarence E. and Hattie (Ralston) Williams. On February 15, 1946 he enlisted and served in the United States Army. He was honorably discharged on August 10, 1947. Upon returning home, he married the love of his life, Shirley (Kuehnlein) on January 24, 1948. Together they raised their beloved daughter, Terri. Lewis was employed by Monroe Auto Equipment for ten years and General Motors until his retirement. During his employment with General Motors he worked on the assemble line and in the maintenance department as an oiler. After he retired in 1986, he and Shirley moved North to be closer to their daughter and grand children. He enjoyed outdoor activities, hiking, fishing and hunting, as a good reason to spend time with his grandchildren. He was a talented wood worker and enjoyed the process of planning and completing numerous projects, one of which was their first house. During the years he was employed with GM he also worked in the evenings for individuals remodeling their homes. In his retirement years he took great pride in the care of his lawn. He by far, had the nicest lawn on the block. He was a member of the Redeemer Lutheran Church in Interlochen and spent many hours helping with the construction of the present church. He was always grateful for the faith he was given in his Savior Jesus Christ and enjoyed worshipping with family and friends on Sunday mornings. Lewis truly cherished his family. He was a wonderful husband, father, grandfather and great-grandfather. He will fondly be remembered for his fun-loving spirit and love for his family. Surviving Lewis is his wife Shirley of 65 years, daughter Terri (Robert) Shoemaker, grandchildren, Erich (Sara) Shoemaker, Laura (Jason) Bauer, Annelise (Thomas) Sophiea, great grandchildren, Elizabeth Shoemaker, Oliver Shoemaker, Edwin Shoemaker, Micah Bauer, Elijah Bauer, Madeline Bauer, Ainslee Sophiea, Isabella Sophiea and many other loving family members and friends. Lewis is preceded in death by his parents and siblings, Clarence, Herbert, Rose, Jack and Darrell. Funeral services will take place on Sunday, October 13, 2013 at the Redeemer Lutheran Church in Interlochen at 3pm. Memorial contributions may be directed to the Redeemer Lutheran Church or to St. Jude’s Research Hospital.

Lewis Elsworth Williams, 85 of Traverse City passed away peacefully on Wednesday, October 9, 2013 at his home with his loving wife at his side. Lewis was born on February 10, 1928 to the late Clarence E. and Hattie (Ralston) Williams. On... View Obituary & Service Information

The family of Lewis Elsworth Williams created this Life Tributes page to make it easy to share your memories.