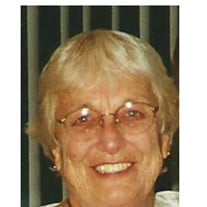 Lois Joy Dexter, 87, of Williamsburg, passed away peacefully on Tuesday, April 15, 2014, at Bortz Health Care. Lois was born on May 25, 1926, in Detroit, to the late Dale and Dorothy (Joy) Liscum. She was married to William Dexter, the love of her life, on November 25, 1946. Bill passed away on January 17, 1996, the year they would have celebrated their 50th wedding anniversary. Lois is survived by a daughter, Linda Dexter Koenig (Florida), a son, Robert Dexter (Oregon), a son-in-law, Richard Fahoome, nine grandchildren (Capella, Dale, Walter, Chris, Raymond, Karyn, Rachel, Eve, and Hannah), many great-grandchildren, and two nieces, Nancy and Mary. Lois was preceded in death by a daughter, Dr. Gail Fahoome, and a sister, Marian Harper. Lois spent practically every summer in Boyne City on Lake Charlevoix where her parents owned and rented cottages. This is where she met “Billy” Dexter. They enjoyed boating, water skiing, snowmobiling , golfing, flying (she soloed), and traveling. She has been to Greece, Russia, Australia and New Zealand. Her favorite place though was her cabin in Boyne City with lots of friends and family around her and spending countless evenings playing cards. She made friends where ever she went and will be missed by many. In accordance with Lois’ wishes cremation has taken place and a memorial service will be held at a later date. Lois’ family would like to thank all her friends and the caregivers at Bortz and Hope Village. She loved you all. A special thank you goes out to Gary Hicks. In lieu of flowers, those planning an expression of sympathy may wish to consider memorials to Boyne City Public Library. Please feel free to share your thoughts and memories with Lois’ family at www.reynolds-jonkhoff.com. The family is being served by the Reynolds-Jonkhoff Funeral Home and Cremation Services.

Lois Joy Dexter, 87, of Williamsburg, passed away peacefully on Tuesday, April 15, 2014, at Bortz Health Care. Lois was born on May 25, 1926, in Detroit, to the late Dale and Dorothy (Joy) Liscum. She was married to William Dexter, the love... View Obituary & Service Information

The family of Lois Joy Dexter created this Life Tributes page to make it easy to share your memories.