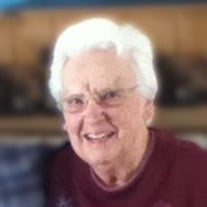 Lois Anne Henry, 90, of Glen Arbor, passed away at home on Friday, December 14, 2018 with family at her side, following a long struggle with Parkinson's disease. She was born on April 12, 1928 in Vicksburg, MI to Watson and Zella (Davis) Weinberg. She taught school in a one room classroom near Mendon before earning her teaching degree from Western Michigan University. Lois and Dick were married at her family home on August 31, 1947. She taught for 5 years at Mendon before moving to Battle Creek where their four children were born. In 1963, they moved to Traverse City and operated the Briar Hill Motel until they purchased the Glen Eden Resort in 1965. Lois was a marvel at overseeing the food service, housekeeping and live-in staff while operating the resort during the summer. During the off season, she was a full time teacher at Glen Lake Schools. During her tenure with the school system, she taught fifth grade at the old school in Empire and then third grade at the consolidated Glen Lake School location. She retired from teaching in 1982 after a long rewarding career. Lois was a member of the Glen Lake Community Reformed Church, Glen Arbor Women's Club, Retired School Personnel and AARP. In her retirement, she enjoyed travel, winters in Gulf Shores, Alabama in their motorhome, cooking and spending time with her grandchildren. One of her greatest loves was big family picnics and gatherings. She will be greatly missed by her whole family and anyone who was fortunate to know her. She is survived by her husband of 71 years, Dick; daughters, Judith (Robert) Miller of Cedar, Janette (Gordon) Wiseman of Traverse City, Jean (Greg) Noah of Honor and son John (Colleen) Henry of Belmont; 11 grandchildren, 4 step grandchildren, 15 great grandchildren and 2 great, great grandchildren. A memorial service honoring Lois will begin at 11 a.m. Saturday, December 22, 2018 at the Reynolds-Jonkhoff Funeral Home, with visitation beginning at 10:00 AM. Interment will be in Maple Grove Cemetery in Empire at a later time. Memorial contributions should be directed to the American Cancer Society.

Lois Anne Henry, 90, of Glen Arbor, passed away at home on Friday, December 14, 2018 with family at her side, following a long struggle with Parkinson's disease. She was born on April 12, 1928 in Vicksburg, MI to Watson and Zella (Davis)... View Obituary & Service Information

The family of Lois A. Henry created this Life Tributes page to make it easy to share your memories.