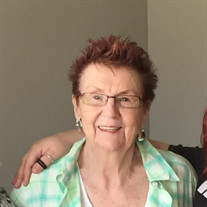 Lois “Lody” Marlene Saltsman, 78, of Glen Arbor passed away surrounded by her loving family on Monday, November 23, 2015 at Munson Medical Center. Lody was born on May 16, 1937 in Hammondsport, NY, to the late Warren and Arlene (Jorgensen) Ketchum. Lody had a genuine interest in everyone she met -- there was no such thing as a stranger. She had an open ear and open heart, and her unique style and approach to life made every conversation and gathering more joyous. Lody was a talented watercolor artist and jewelry maker. She was an ordained minister with the Church of God, Anderson, Indiana. She recently retired as a Chaplain in the Pastoral Care Department of Munson Medical Center, and previously worked as a Psychotherapist with Pine Rest Psychological Services in Traverse City. Surviving Lody is her daughter, Chris (Donnie) Wilson; grandchildren, Sydney Wilson, Ashley (Rob) Blevins, Andrew (Sarah) Saltsman; great grandchildren, Anya, Emma, and one on the way; a very special best friend Dr. Ann M. Salisbury and her family; daughter-in-law Sharon Tighe; sister-in-law Diana Ketchum; her beloved furry friend Mulligan; and many other loving family members and friends. Lody is preceded in death by her parents, a son Dr. Terry M. Saltsman, brothers Jack and Jan Ketchum. A memorial celebration of Lody’s life, officiated by Jan Price, Pastor of Adult Discipleship, will take place on Monday, November 30, 2015 at 1:00 pm at the Glen Arbor Town Hall with a luncheon to follow. In lieu of flowers memorial contributions may be directed to the Empire Area Food Pantry or to your local food pantry. Kindly share thoughts and memories with Lody’s family at www.reynolds-jonkhoff.com.

The family of Lois "Lody" Marlene Saltsman created this Life Tributes page to make it easy to share your memories.