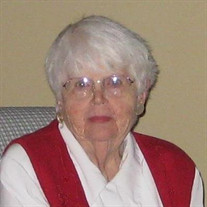 Lola Doreen (Nicky) Foster passed away at French Manor South on March 2, 2018, with the love and support of her family ever present. She was born on July 15, 1927 to Viola and John Nixon, in Orangeville, Ontario, Canada. She attended kindergarten through second grade in Toronto, Canada until her parents returned to Michigan. Lola spent the rest of her youth in the Detroit area, attending schools in Detroit, Highland Park, and Ferndale. While attending Ferris school in Highland Park, she began the study of violin and became a highly skilled musician playing violin and piano, and has fond memories of attending the Interlochen music camp while in High School. It was while she was concert mistress of the Lincoln High School Orchestra, in Ferndale, Michigan, that she spotted a certain cute trumpet player in the orchestra. That trumpet player, Jack Foster, became her best boyfriend and also gave her the name “Nicky,” the name she was known by for the rest of her life. Jack left Ferndale to serve in the U. S. Navy during WWII, but returned to Nicky to start a life long partnership. They were married on August 2, 1946, a marriage that lasted 64 happy years until Jack’s death in January of 2011. Nicky was the proud mother of four children, three girls and one boy. She enjoyed being a stay-at-home mom for many years, but, in 1969, she decided to go to college and earn a teaching degree. She attended Wayne State University and completed all four years of her undergraduate teacher training in just over two years. After graduation, she secured a teaching position with Clawson Public Schools and remained a teacher in that school system until her retirement in 1990. Nicky and Jack Foster were both beloved teachers in the Clawson School District and enjoyed many visits from former students after retiring to Traverse City. Nicky and Jack enjoyed living on Old Mission Peninsula for 26 years following their retirement from teaching. They felt blessed to be able to build Nicky’s dream “log cabin” with a view of West Grand Traverse Bay and Power Island. That home was the hub of many family gatherings and celebrations,including anniversaries, birthdays, holidays and even providing housing for family and guests for the weddings of two of their grandchildren. During their life in Traverse City, they enjoyed the fellowship at Central United Methodist Church and participated in many volunteer opportunities. Nicky enjoyed over ten years of serving as a volunteer at the Dennos Museum gift store. Nicky also served as a Stephen Minister through Central United Methodist Church for several years until Jack’s health required more of her attention. In April of 2017, Nicky moved into French Manor South and returned to her birth name of Lola. Her family is grateful to the loving care and support that the staff provided Lola during her last year as she dealt with several health issues and declining mobility. It was so special, though not surprising, to hear the staff talk about what a special and kind person Lola was. The family would like to thank all the staff at French Manor for their tender caretaking and would like to extend a special thank you to Wendy who provided such loving care and who Mom trusted more than anyone. The family is also grateful for the loving care and support they received from Hospice of Michigan. Nicky is survived by her four children: Kathleen Foster of Traverse City, Deborah (Larry) Lehmann of Maple City, James (Alice) Foster of Rochester, Michigan, and Patricia (Patrick) Conaton of Clawson, Michigan. Nicky is also survived by her eight grandchildren and eight great grandchildren. A memorial service will take place Saturday March 10, 2018 at 11:00am at the Central United Methodist Church with visitation one hour prior. Pastor Dale Ostema will officiate. In lieu of flowers, memorial donations may be made to the Southern Poverty Law Center, 400 Washington Ave, Montgomery, AL 36104 or donate.splcenter.org; Dennos Museum, 1701 East Front St.,Traverse City, MI 49686; or the Central United Methodist Church, 222 N. Cass St, Traverse City, MI 49684. The family is being cared for and served by the Reynolds-Jonkhoff Funeral Home and Cremation Services. Share your thoughts and memories with Nicky’s family at www.reynolds-jonkhoff.com

Lola Doreen (Nicky) Foster passed away at French Manor South on March 2, 2018, with the love and support of her family ever present. She was born on July 15, 1927 to Viola and John Nixon, in Orangeville, Ontario, Canada. She attended kindergarten... View Obituary & Service Information

The family of Lola Foster created this Life Tributes page to make it easy to share your memories.