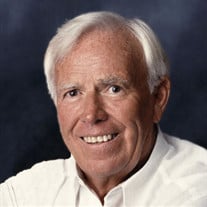 Loren Kay Bethke, 89, of Williamsburg, MI and formerly of Dundee, IL, died Friday, September 13, 2019 at Munson Medical Center in Traverse City. Loren was born on Thursday, August 14, 1930 in Elgin, IL the son of Melvin T. and Florence (Suftin) Bethke. After graduating from high school, he attended DePauw University in Greencastle, IN where he earned his bachelor of science degree in business. While attending Dundee High School, Loren met Helen D. Brockman. They became fast friends, began dating and would marry on July 30, 1950 in St. Charles, IL. They continued to live in Dundee where Loren had taken over the family business, Bethke Clothiers, Inc., a men's clothing store, where Helen would assist him in running the business. Loren also owned and operated A-Lad-Inn Boys Store. After his retirement he and Helen relocated to Williamsburg, MI where he spent several years as a bus driver for the Elk Rapids School District. Loren was active in the Dundee community. He served as a trustee of West Dundee and was also active in the Lions Club there. He and Helen enjoyed years of boating on the Fox River in Illinois and later at their retirement home in Michigan. Surviving Loren are his sons, Craig (Linda) of Williamsburg, Scott (Karen) of Fenton; grandchildren, Robert (Jackie), Paul (Ashley), Richard (Renay), Brock (Ashley), Eric (Ashley), Breanne (Joe) Kowalski and Alex: along with 9 great grandchildren. He is also survived by his brother Melvin of Albuquerque, NM and sister Margaret (George) Pierce of Barrington Hills, IL and two nieces. Loren was preceded in death by his parents, and his wife Helen D. Bethke, who passed away on January 13, 2019 An intimate family service with interment for both he and Helen in Dundee, Illinois will be held at a later date. Memorial contributions may be directed to The Father Fred Foundation. P. O. Box 2260, Traverse City, MI 49685.

The family of Loren Kay Bethke created this Life Tributes page to make it easy to share your memories.

Loren Kay Bethke, 89, of Williamsburg, MI and formerly of Dundee,...