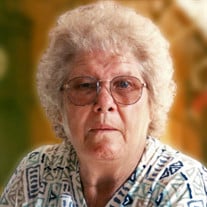 Loretta L. Barrett, 90, of Interlochen passed away peacefully on Sunday September, 15, 2019 at Munson Medical Center. She was born on December 5, 1928 in Scottville, Michigan to the late Elam and Ollie (Bailey) LaParr. Loretta was preceded in death her spouses; Robert Priest, Lawrence Robinson and later Loren “Dick” Barrett. Over the course of her life Loretta had been employed at Sleder’s Family Tavern, Ben’s Bar, private housekeeping and in the laundry department at Munson Medical Center. She enjoyed fishing, crafts, gardening, cooking and hunting. She was very proud of getting an eight-point buck. Above all, she loved her grandchildren; they were her life. Loretta is survived by a daughter, Cindy (John) Dahlke, a son, Robert (Phyllis) Priest, grandchildren; Jean Case, Jenny Case, Edward Priest, Magnolia Cooper and Kenneth Priest. Also surviving are great-grandchildren; Tyler, Taylor and Dale Cooper, Lauren and Hunter Priest. She was also preceded in death by a son, Laverne Priest, an infant daughter, Becky Jean Priest, four brothers; Charles, Edward, Mose and Wesley as well as three sisters; Elenor, Inez and Arlene and special companion of 16 years, John Kennedy. Loretta’s family would like to extend a heartfelt thank you to; John and Connie Kennedy and family, Jodi Rauch, Harold and Irene Martin and Magnolia Cooper as well as the caring staff on D5 at Munson Medical Center. Your loving care of Loretta meant so much, with a sincere Thank you. In accordance with Loretta’s wishes cremation has take place. Those planning an expression of sympathy may wish to consider a memorial donation to St. Jude Children’s Research Hospital, 262 Danny Thomas Place, Memphis, TN 38105. Please feel free to share your thoughts and memories with Loretta’s family and her tribute page at www.reynolds-jonkhoff.com. The family is being cared for by the Reynolds-Jonkhoff Funeral Home and Cremation services.

Loretta L. Barrett, 90, of Interlochen passed away peacefully on Sunday September, 15, 2019 at Munson Medical Center. She was born on December 5, 1928 in Scottville, Michigan to the late Elam and Ollie (Bailey) LaParr. Loretta was preceded in... View Obituary & Service Information

The family of Loretta Barrett created this Life Tributes page to make it easy to share your memories.