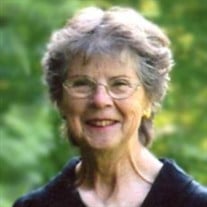 Leland- Louise Brown Brunelle, 85, of Leland passed away peacefully on Easter Sunday, April 12, 2020. Louise was born at home on May 2, 1934 in Kewadin to the late Jerry and Erma Marie (Sutter) Nemec. Louise married Harold Brown Jr. on December 9, 1950 in Elk Rapids. Together they had three children Skip, Lynn and Sue. Throughout her life, Louise was an outstanding mom and grandma. She was the cook at East Bay Elementary School in her early years. She and Harold then went on to own and operate the Briar Hill Motel in Traverse City and the Granada Inn in Kalkaska for many years. They were members of the Presbyterian Church in Traverse City. Harold passed away in 1991 after a chronic illness. Louise was also a realtor for over 30 years. Her warm smile allowed her to excel at anything and everything she did. While working as a realtor she met Bill Brunelle who was also a realtor. On May 30, 1998 Louise married Bill. She and Bill loved to golf and would play as often as they could. They wintered in Naples for 17 years and enjoyed volunteering for the Champions Tour Event held at various courses in the Naples area. She was the captain of the many volunteers for the 10th hole on all of the courses and did a fantastic job of keeping everyone in line. She also enjoyed getting autographs from the pros, most notably Gary Player and Hale Irwin. The National Cherry Festival was very special to Louise. She was the first female president of the festival and served as the Queen Mom for many years. Louise was a gifted quilter. Her family and Bill's cherished all of the quilts she made for them, one of which was a prize winner at an art show in Naples. Louise also loved to travel. She and Bill visited well over 20 states, many foreign countries, and sailed aboard the Freighter Armco in the Great Lakes where Louise bested the captain in a game of Gin. New Zealand was definitely a favorite destination having gone there twice. Louise will be greatly missed by her family and friends. Louise is survived by her husband Bill; son Skip Brown, daughter Lynn (Dan) Steinebach and daughter Sue (Dirk) Sawusch; grandchildren Sara (Andy) Bogard, Carrie (Eric Warnes) Brown, Katie (Rich) Koths, Beth (Ed) Fantozzi, Emily (Jake) Weiderman and Lukas Sawusch; great grandchildren Fisher, Noah and Corbin Bogard, Ivy and Ben Baillie, Henrik Koths, Maddie Weiderman, sisters Joyce (Ron) Grammer, Jane (Jack) Orr, Linda Newhouse, Pat (Gordy) Converse and many nieces and nephews; Bill’s children Richard “Rick” (Carol) Brunelle, Kathleen (Pat) Fabian, and Greg (Sue) Brunelle; and Bill’s grandchildren Megan, Nicholas, and Kelly. Louise was preceded in death by her daughter-in-law Janet Brown and her first husband Harold Brown. A private memorial service for the family and close friends will be held on Friday July 24, 2020 at 11:00 am, with visitation beginning at 10 am in the gardens at Reynolds Jonkhoff Funeral Home. Pastor Daniel Hoffman will lead the service of celebration for her life. Friends are invited to watch the live webcast at www.rjfh.tv or watch it on her memorial webpage after the services at www.reynolds-jonkhoff.com Memorial contributions in her honor may be directed to Freedom Builders Missions. www.fbmissions.org The family would like to thank Culver Meadows for taking such good care of Louise the past few months.

The family of Louise Brown Brunelle created this Life Tributes page to make it easy to share your memories.