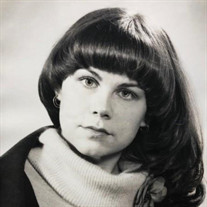 Louise McCowan was born on March 27, 1949, in Jackson, Michigan, and passed away at Medilodge Leelanau on March 20, 2021. She spent the last eleven years of her life at Medilodge as the result of Parkinson’s Disease and related conditions. Louise graduated from Michigan State University with a degree in communications. She worked for Sears, Roebuck and Company for nearly twenty years. As a creative copywriter, her work was seen by people across the nation, in both Sears stores and in the ubiquitous Sears catalog. Louise was a gifted musician and singer, whose annual pilgrimage to the Evart Dulcimer Festival every July was a major event not only for herself, but for the many friends and musical partners that looked forward to hanging out and jamming with her. It was only after her move to Medilodge that her family became fully aware of Louise’s large and loving musical family, people that we are ever grateful to for their caring presence and the many stories they shared of the effect that she had on their lives and their music. Inspired by Bob Dylan and Joan Baez, Louise was completely self-taught, both as a guitarist and a singer. Her voice was warm, vibrant, and, without exaggeration, was in a league with the best folk singers of the day. Her stay at Medilodge was unusually long, but it was filled with the good company and support of both the caregivers and the residents. Everybody seemed to know Louise. There were countless stories of her wry wit and sense of humor, and her appreciation of nearly anything with chocolate in it. Her family is grateful to the staff and residents of Medilodge for making a close and supportive home for Louise. Louise was preceded in death by her parents, Walter and Roberta McCowan. She is survived by her sisters, Susan (John) Krenkel, of Dallas, Oregon, and Cindi (John) DeSpelder of Traverse City, and nephews Evan (Suzy Kim) DeSpelder of Berkeley, California, Nate (Cornelia Calder) Krenkel of Portland, Maine, Aaron (Alynn Nelson) Krenkel of Nelson, British Columbia, and special friend, cousin Agnes Tupes of Phillipsville, California. Those that wish to make contributions in Louise’s memory may choose Parkinson’s Network North (https://www.parkinsonsnetworknorth.org/donate/) or the Cherryland Humane Society (https://cherrylandhumane.org/donate/) . There are no plans for a funeral service, however the family would appreciate notes and stories left here at this memorial webpage.

Louise McCowan was born on March 27, 1949, in Jackson, Michigan, and passed away at Medilodge Leelanau on March 20, 2021. She spent the last eleven years of her life at Medilodge as the result of Parkinson&#8217;s Disease and related conditions.... View Obituary & Service Information

The family of Louise Annette McCowan created this Life Tributes page to make it easy to share your memories.