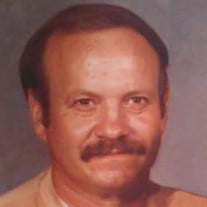 Lowell George Brownell, 82, of Traverse City passed away on Thursday, September 15, 2016 at The Villa at Traverse Point surrounded by his loving family. Lowell was born on October 29, 1933 to Kenneth and Irene (Fruzen) Brownell in Dowagiac, MI. After high school Lowell served his country in the United States Air Force from 1952 - 1956. After his enlistment, he worked for the city of St. Joe first in the municipal department and then as a police officer. It was during his time working with the St. Joseph City as a snowplow driver that he met his future wife. He married Betty Miller in 1960 and together they raised two girls; Diane and Lisa. Lowell moved with his family to Traverse City in 1976 and worked at First Congregational Church for many years as a maintenance worker and grounds keeper. Lowell was an avid fan of baseball and football, especially the Detroit Tigers and Detroit Lions. His lawn was always meticulous and he had a great love of the outdoors. He enjoyed hunting and fishing. Most of all, though, Lowell will be remembered for his love and compassion; especially the years spent providing loving care to his wife. He is survived by his daughters Diane (Allen) Reeder and Lisa Adkins(Trapper Searle); sisters Doris Glenn, June Dings, Dorothy Pullano and Eleanor Lambecht; brother Roy Brownell; grandchildren Brandon Adkins (Derek Woodruff), Miranda (CJ) Staley, Courtney Goodman, Olivia Adkins, Anthony Benak; step grandchildren Sadie and Logan Reeder. He was preceded in death by his wife Betty Brownell; parents Kenneth and Irene Brownell; sisters Ruth Wambaugh and Jean Head; brothers Ray Brownell and Kenneth Brownell; son in law Randy Goodman. A memorial service will be held on Saturday, September 24, 2016 at 11 a.m. at the First Congregational Church, with visitation beginning at 10 a.m. Dr. Gary Hogue will officiate the service. In lieu of flowers the family asks that expressions of sympathy be directed to Hospice of Michigan, 10850 East Traverse Highway, Suite 1155, Traverse City, MI 49684 or St. Jude's Children's Hospital, 262 Danny Thomas Place, Memphis, TN 38105.

Lowell George Brownell, 82, of Traverse City passed away on Thursday, September 15, 2016 at The Villa at Traverse Point surrounded by his loving family. Lowell was born on October 29, 1933 to Kenneth and Irene (Fruzen) Brownell in Dowagiac,... View Obituary & Service Information

The family of Lowell George Brownell created this Life Tributes page to make it easy to share your memories.

Lowell George Brownell, 82, of Traverse City passed away on Thursday,...