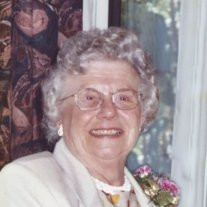 Traverse City-Lucille Swanson, died March 18, 2013, at Munson Hospice. Born January 16, 1922, in Montello, Wisconsin she was the daughter of Frank and Stella Rozek. After graduation from high school she moved to Milwaukee where she became the assistant and office manager to a doctor. On June 13, 1953, she married Herbert Swanson. They had met the previous summer while playing golf, a game they played together for many years. Lucille and Herb enjoyed almost 60 years of loving, harmonious marriage. While living in Milwaukee they had two children, Glen and Karen. In 1962 they moved to the Chicago area, living in the suburbs of Wilmette and Winnetka. A number of years later their daughter Karen was living in Traverse City, and Lucille and Herb decided that was a great place to live, also, and moved there in 1980. Their son Glen, a postal employee, was able to get transferred from Chicago, so the entire family was in TC. Later when Karen fought cancer for six years, Lucille and Herb were thankful they were there to help. Lucille and Herb loved to travel and see new places. They visited all 50 states and all but one Canadian Province. Accompanied by their son Glen, they went to Europe four times, the first three of which they rented a car and explored on their own. During school vacations when their children were young they traveled a number of times to the mountain and canyon country of the American West, visiting all of the major National Parks, camping and hiking in many of them. Lucille loved playing bridge with her bridge groups and couples. She was a loving wife, mother and grandmother. Everyone liked and respected Lucille. She was a sweet, unassuming person. In later years a balance problem restricted and limited her activities quite significantly, but she never complained about her situation. Whenever she was asked how she felt she always replied "fine". And that word describes Lucille. She was fine, indeed. Lucille was preceded in death by her daughter Karen (Wisniewski), her parents, and all eight of her siblings. She is survived by her husband Herb, her son Glen of Traverse City, her grandson Kenneth Wisniewski of Chicago, and nieces and nephews in Wisconsin, Illinois and Iowa. In keeping with her wishes, no services are planned. Memorials may be directed to Munson Hospice House. Please sign the guest book at www.reynolds-jonkhoff.com. Burial arrangements are being handled by Reynolds-Jonkhoff Funeral Home and Cremation Services.

Traverse City-Lucille Swanson, died March 18, 2013, at Munson Hospice. Born January 16, 1922, in Montello, Wisconsin she was the daughter of Frank and Stella Rozek. After graduation from high school she moved to Milwaukee where she became... View Obituary & Service Information

The family of Lucille Margaret Swanson created this Life Tributes page to make it easy to share your memories.