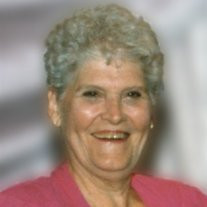 Luella J. Moyers, 89 of Empire passed away peacefully on Wednesday, June 26, 2013 at Tendercare in Traverse City. Luella was born on June 5, 1924 in Miami, FL to the late John Paul and LaVina (Fordyce) Wyss. She married the late Lee G. Moyers in Baton Rouge. Together they raised four loving children. Her husband was in the United States Air Force. Together with their three older children, they lived many places around the United States and France. In the late 50’s they were stationed at the air force base in Empire where they remained. She was a member of the St. Philip Neri Catholic Church and the VFW Auxiliary. She worked at Harriger’s Restaurant in Empire for over 20 years. She and her daughter started Grandma Lou’s Pie Compnay in 1993, where until 2003, she made her famous homemade pies. She worked at Beare Hugs Day Care where she cared for many of the area’s children. She enjoyed reading mysteries, crossword puzzles, sewing, knitting, crocheting, and rarely missed Wheel of Fortune. Besides being a wonderful wife, mother, grandmother and friend, she was loved and known as Grandma Lou by many in her community. She was a wonderful person and she will be deeply missed by all who knew her. Surviving Luella are her children, Pauline (Richard) Smith, Tina (BobWinterhalter) Moyers, daughter-in-law, Linda Moyers, son-in-law Russ Wedeiemer, grandchildren, Russ, Wendy, Bob, Shelly, Cindy, Melissa, Alysia, Cody, Tyler, Haley, Jamie, ten great grandchildren and three great great grandchildren. Luella is preceded in death by her parents, her husband Lee, her brother Arnold “Bud” Wyss, and son’s David and James. Funeral services will be held for Luella at St. Philip Catholic Neri Church on Monday, July 1, 2013 at 11am with a visitation held one hour prior. Memorial contributions may be directed to St. Philip Neri Catholic Church. Please sign Luella’s online guestbook at www.reynolds-jonkhoff.com.

The family of Luella J. Moyers created this Life Tributes page to make it easy to share your memories.

Luella J. Moyers, 89 of Empire passed away peacefully on Wednesday,...