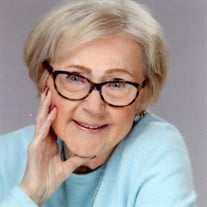 Traverse City - Lurella “Lu” Sheetz, born Lurella Reed on January 22, 1928, nearly died of rheumatic fever when she was 12 years old. Nevertheless, she lived 93 active years and had a satisfying career, successful marriages, three children and four stepchildren, and many happy years in retirement. She lost parents, three husbands, three siblings, a five-year-old son, and countless close friends, but her positive spirit and faith always re-emerged after any sorrow. Lu knew how to have fun, and at various points of her life, she enjoyed golfing, dancing, snowmobiling, boating, bowling, playing bridge or dominoes or computer games, decorating her home, and always, socializing. She was an outstanding cook and an accomplished seamstress, making or altering clothes and household items for herself, her daughter, and many others. She made elaborate birthday cakes and handmade Halloween costumes. She loved college football and sometimes had season tickets to both Michigan State and University of Michigan games. Lu worked as a trusted and efficient executive secretary, but her primary focus was always her family. She was born in Berrien Springs, Michigan, to Dean and Wilma Reed, and she graduated from high school in Mishawaka, Indiana. She married A. Gene Gazlay in 1949 and raised their children in Gladwin, Michigan, and in the Lansing area. Lu and Gene were married for 25 years, and Gene was director of the Michigan Department of Natural Resources when he died in 1974. In 1975, she married John R. Mills, and the couple lived in Holt, Houghton Lake, and New Port Richey, Florida. Her last marriage was to Leo Sheetz, with whom she moved to Traverse City in 2000, and who died in 2015. In addition to her parents and three husbands, Lu was pre-deceased by son Mark Kent Gazlay, brother Kenneth Smith, sister Janice Erbaugh, brother Gerald Reed, grandson Bryce Mills, and stepdaughter Connie (Earnie) Marenich. She is survived by daughter Maurine (Frank) Slaughter, son Ray (Cathy) Gazlay, sister Barbara (Ron) Plakke, stepson Jack (Vickie) Mills, stepdaughters Sharon Stafford and Jean Young, Ray’s son, Mark Kent Gazlay; and Maurine’s stepdaughter, Bethany Slaughter. She was delighted to be grandmother, great-grandmother, and great-great-grandmother to the offspring of John Mills and of Leo Sheetz. Cremation has taken place, and a memorial service is postponed until travel is safer. Anyone interested in a memorial contribution could consider The Father Fred Foundation, Habitat for Humanity, or another charity of choice. The family wishes to thank the capable and compassionate nurses on the orthopedic floor of Munson Medical Center. Please feel free to share your thoughts and memories with Lu’s family at her tribute page at www.reynolds-jonkhoff.com. The family is being cared for by the Reynolds-Jonkhoff Funeral Home and Cremation Services.

The family of Lurella M. Sheetz created this Life Tributes page to make it easy to share your memories.