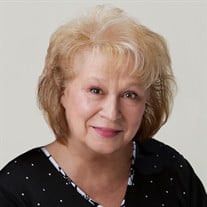 Lynda Kay Cosgrove was received into the arms of her Savior Jesus Christ on January 4, 2020, at her home in Traverse City, Michigan, at the age of 73. She unquestionably began her eternal life with Him on this day. Lynda was born on July 28, 1946, in Lima, Ohio, to Carl and Grace Mae (Castle) Schneider, who both preceded her in death, as well as her brother, Gary (Helen) Schneider, and her father-in-law, John Cosgrove (whose birthday is also January 4th). Lynda came from a home with a strong Midwestern value system. Her father passed away when Lynda and her twin brother, Lynn, were three and her younger brother, Gary, was two. Her mother worked and raised three children by herself, and Lynda was known as “Saint Lynda” to the brothers she ruled. As an adult, Lynda always maintained as truth that she was five years younger than her twin brother. Lynda graduated from Indiana State University, Fort Wayne. She moved from Westerville, Ohio, to Traverse City in 1985 with her three sons, where she worked for Thomson-McKinnon Securities. Lynda married Thomas Cosgrove on April 25, 1987. She continued her career at Merrill Lynch, UBS, Hightower Securities and First Asset Financial, Inc. She served as president of BPW (Business Professional Women) of Elk Rapids, and was appointed by Governor Granholm to the Michigan Department of Civil Rights, Michigan Women’s Commission. Having worked in the financial industry for forty-eight years and held just about every position possible, from chalk girl to mergers and acquisitions coordinator to financial consultant, Lynda’s depth of knowledge was astounding. The friendships she developed with both coworkers and customers made her extensive career enjoyable. Her clients know her as so much more than a financial advisor - she was a confidant, caregiver and friend. In the fall, you could find Lynda on any given Saturday watching a full day of college football, from the noon kickoff to the late West Coast games. A favorite for her was sharing that time with her brother-in-law Dave (and now she’s undoubtedly watching football in heaven with her father-in-law). Then on Sundays, Lynda would be found keeping close tabs on the NFL and her Fantasy Football teams (at one point having the only all women team). Her first experience with “owning” a team was in 1986, which also was the first time she won the whole league (but not the last time). She was very invested in her current league and the new friendships she developed. Lynda had the only mother-son team with her son, Trevor. One of Lynda’s true joys was her relationship with her Bible Study group that has been meeting for over thirty years. Many times they would just talk and eat pie. She truly treasured each and every one of those women and held them close to her heart. Over the thirty years there were over forty-five woman involved and over thirty-five grandchildren born. Mary Ryan, Jill Kipley, Kathy Hunt and Deb Ross are particularly special, but there were many, many more. Lynda was boundlessly generous with her love, time and energy to family, friends, and strangers. Lynda served as a Doula Mentor for the Doula Teen Parent Program and volunteered as a Navigator for cancer patients with Munson Medical Center. She frequently surprised strangers in the community by paying it forward in the check-out lines, bought car tires for the unsuspecting single working mom, paid for a new roof for a good friend (without the friend knowing) and so much more. You never knew what Lynda would do next to help others, but she always would. One of Lynda’s greatest joys was when she and Tom established The Cosgrove Foundation, a nonprofit foundation existing to help those in need. Lynda led a life of loving and giving. Her compassion touched people from all walks of life. Her smile lit up a room, and her laugh was infectious. Her family will remember Lynda as loving wife, dedicated mother, doting grandmother, genuine friend, fierce protector, and guardian angel. She would do anything for her “babies” (even if that involved more sweets and treats than their parents knew about). Lynda will be deeply missed. Lynda is survived by her devoted husband, Tom Cosgrove; brother, Lynn Schneider; sister-in-law, Helen Schneider; children, Travis Fetters, Trent (Ginette) Fetters, and Trevor (Emily) Fetters; and grandchildren, Olivia, Lexi, Lyla and Lacy Fetters, and Ella, Brennan and Beckett Fetters; mother-in-law, Eleanor Cosgrove; sister-in-law, Susan (Patrick) Cole; brothers-in-law, David and John (Trish) Cosgrove; and numerous nieces and nephews. Lynda requested a special mention of Susan Tuttle and Deb Bowron, who accompanied her to every hospital visit and chemotherapy session, of Mary Ryan and Sue Cole who would drop everything when needed, and of the whole staff at the Cowell Cancer Center and Dr. Lisa Hughes’ team. A visitation will take place on January 16, from 5:00-7:00pm, at the Reynolds-Jonkhoff Funeral Home. The funeral service at New Hope Church is scheduled for Friday, January 17, at 11:00am, with visitation starting at 10:00am. Pastor Tim Manzer of New Hope Community Church and Pastor Gary Bekkering of The First Congregational Church of Central Lake will officiate the ceremony. A reception and sharing of memories will follow the service at The Elks Lodge. All are welcomed to attend and celebrate Lynda’s life. In lieu of flowers, please consider donations to : First Congregation Church of Central Lake, PO Box 326 Central Lake, MI 49622. Re:"Lynda's Fund"

Lynda Kay Cosgrove was received into the arms of her Savior Jesus Christ on January 4, 2020, at her home in Traverse City, Michigan, at the age of 73. She unquestionably began her eternal life with Him on this day. Lynda was born on July... View Obituary & Service Information

The family of Lynda Kay Cosgrove created this Life Tributes page to make it easy to share your memories.

Lynda Kay Cosgrove was received into the arms of her Savior Jesus...