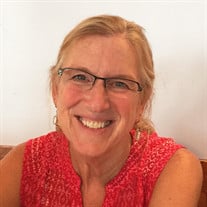 Today, we honor a loving wife, a proud mother, a loyal sister, a selfless friend – and, of course, we celebrate our Queen Bee. Lynn Sue Reichard Baumann, 65, of Cedar, passed away April 8, 2018 at her home, surrounded by her loving family and friends. Lynn was born on May 27, 1952 in Saginaw, Mich., the daughter of Maynard and Peggy (Barnes) Reichard. Lynn graduated from Hemlock High School in 1970 and then continued her education at Central Michigan University, earning her bachelor’s degree in education. She later earned her degree in special education, and taught for 40 years, 25 of which were at the Adult Work Center in Traverse City. Lynn was awarded the Outstanding Educator award in 1992 and retired from TCAPS in 2014. She was very proud of her students. On June 24, 1977 in Lexington, Ky., Lynn married Terrence Jay “Terry” Baumann. It was a long time coming – Terry and Lynn first met when they were about 13, and Terry said that the first time they made eye contact, he heard a “ding!” go off in his head. Over the years, they made their homes in Lexington, Ky. and in Michigan in Hemlock, Huntington Woods, and Traverse City. She was a member of Immaculate Conception Catholic Church, and enjoyed yoga, spinning and traveling. She especially loved taking classes at Yen Yoga in Traverse City, and was very moved by the support she received from the staff there in her last few years. Lynn was best known for her selflessness, and worked to make others comfortable even in her death. Her daughters would often beg her to put her phone on silent, reminding her that she didn’t always have to help others every moment of the day. She would become quiet upon this suggestion, refusing to turn off her ringer just to make sure she could be reached in case someone needed her. She didn’t like being the center of attention, but loved planning events and hosting gatherings, sitting back to watch as the people she loved enjoyed the big and small details of her care as well as each other’s company. Along with her kindness came her loyalty; Terry said that she was always sweet to everyone unless they crossed her daughters, her friends, or her sisters, “and if they did, it was not pleasant for several days.” Lynn kept her sense of humor all the way through her illness, slipping out her signature, emphatic “O. M. G.” anytime she received positive news – or if she heard a good piece of gossip. If it was her turn to tell a story though, you’d better have come with a chair and some popcorn; the stories usually took longer to get out than the original events they described. She was known for how particular she was about her nails, and was very proud that she was younger than Terry… by five months. She was often funny without meaning to be. For example, for years she thought LOL meant “lots of love,” and was only corrected after she sent a rather confusing and seemingly insensitive text to her daughter Amy after Amy came to her for comfort. The day before her death, family and a few close friends worked together to create a small ceremony for Lynn and Terry’s youngest daughter Ashley and her fiancé Keegan at the Baumann home. It was Lynn’s goal to make it to Ashley’s wedding later this summer, so they brought the wedding to her – complete with tin foil rings made by the groom that morning. When the bride and groom kissed, Lynn collected her energy to raise her arms up and clap, opening her eyes to see her daughter and tell Keegan she loved him. There wasn’t a dry eye in the room. Lynn is survived by her husband, Terry; her daughters, Amy Lynn Baumann of Chicago and Ashley Lorraine Baumann of South Bend, Ind., as well as Ashley’s fiancé Keegan Williams, also of South Bend; her sisters, Kathy Ann (Steve) Sloneker of Clark Summit, Pa. and Cindy Marie (Mark) Roman of Paw Paw, Mich.; her mother-in-law Kathleen Baumann of Saginaw; brothers-in-law Dan (Lori) Baumann of Rochester Hills, Mich. and Steve (Brenda) Baumann of Tucson, Ariz.; and her sister-in-law Jan (Tom) Storm of Honolulu. She leaves behind several beloved nieces and nephews, as well as and many dear friends. Lynn was preceded in death by her mother Peggy, her father Maynard, and her father-in-law Larry Baumann. Visitation for Lynn will take place from 5 until 8 p.m. Thursday, April 12 at The Reynolds-Jonkhoff Funeral Home. The funeral mass will be celebrated at 11 a.m. Friday, April 13 at Immaculate Conception Catholic Church, with visitation one hour prior to the mass. The Rev. Father Christopher Jarvis will preside, and the mass will be followed by a celebration of Lynn’s life. Inurnment will take place at a later date in the columbarium of Oakwood Catholic Diocesan Cemetery. At her suggestion, Lynn asked that she be remembered through memorial contributions to Special Olympics Area 2,c/o John Casteel, 12337 Bluff Road, Traverse City, MI 49686 or to the Women’s Cancer Fund, c/o Munson Healthcare Regional Foundation, 1150 Medical Campus Drive, Traverse City, MI 49684 (www.munsonhealthcare.org/foundation).

Today, we honor a loving wife, a proud mother, a loyal sister, a selfless friend &#8211; and, of course, we celebrate our Queen Bee. Lynn Sue Reichard Baumann, 65, of Cedar, passed away April 8, 2018 at her home, surrounded by her loving family... View Obituary & Service Information

The family of Lynn Sue Baumann created this Life Tributes page to make it easy to share your memories.

Today, we honor a loving wife, a proud mother, a loyal sister,...