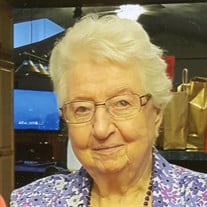 Marcella “Marcie” Lautner Balthaser, 86, of Marion, IN, and formerly of Traverse City, passed away Saturday, June 11, 2016 at Colonial Oaks Health and Rehab Center. Marcie was born May 9, 1930 in Charlevoix, MI to Albert and Bernice (Schooly) Shaw. She married Marvin Lautner on February 13, 1953 and was married 42 years before he passed in 1995. Marcie and Marvin had three children together, who survive. She and Marvin owned a reupholstering of furniture business in their home for many years. Marcie married Norman Balthaser on August 8, 2003 and was married for 9 years, living in Brooksville, FL, before he passed in 2012. After the death of Norman, Marcie moved to Colonial Oaks Retirement Village in Marion, IN. Marcie will be remembered for her faith in God, whom she trusted throughout her lifetime. She remained steadfast throughout the passing of her husbands and many health related trials, counting the many blessings that were bestowed upon her. She was strong-willed and cherished her independence. Marcy had a wonderful sense of humor and had a competitive streak, especially when it came to board games. She enjoyed traveling with Marvin in their motor home. Marcie was a member of the Bayview Wesleyan Church in Traverse City for many years. She especially enjoyed her friendships with those in the church and throughout the years of being a Christian Youth Crusader (CYC) director with the children. Marvin and Marcie volunteered at the Southwest Indian School in Peoria, AZ for a couple years. Marcie is survived by her sister Mary (Edwin) Gregory of Kalamazoo and twin sister Maezella (Robert) Potter of Charlevoix; children Nancy (Richard) Bennett of Traverse City, Janet Lautner of Shelby, NC, and Kevin (Ann Marie) of Midland; grandchildren Kristy (Matt) Wiersema and Bradley Yahr of Traverse City; great-grandchildren Rowan and Silas Wiersema; step-children Barbara O’Brien, Nelson Balthaser, Elaine Balthaser, and Susan Wilson of Pennsylvania. She was preceded in death by husbands Marvin Lautner and Norman Balthaser and brother George Shaw. A funeral service will be held Saturday, June 18, 2016 at Bayview Wesleyan Church at 11 a.m., with visitation beginning at 10 a.m. Rev. Richard Bennett (her son-in-law) will officiate the service. Those planning an expression of sympathy in Marcie’s name may wish to consider a memorial donation to Bayview Wesleyan Church, 720 Wayne Street, Traverse City, MI, 49684 or National Stroke Association, 9707 East Easter Lane, Suite B, Centennial, CO 80112.

Marcella &#8220;Marcie&#8221; Lautner Balthaser, 86, of Marion, IN, and formerly of Traverse City, passed away Saturday, June 11, 2016 at Colonial Oaks Health and Rehab Center. Marcie was born May 9, 1930 in Charlevoix, MI to Albert and Bernice... View Obituary & Service Information

The family of Marcella Lautner Balthaser created this Life Tributes page to make it easy to share your memories.

Marcella “Marcie” Lautner Balthaser, 86, of Marion, IN, and formerly...