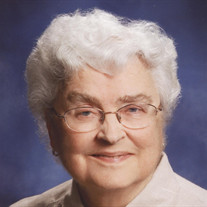 Marcia Ann (Holbrook) Keating, 85, of Traverse City passed away peacefully December 22, 2014 at Grand Traverse Pavilions surrounded by her family. Marcia was born March 9, 1929 in Petoskey, Michigan to the late Donald Holbrook and Mabel Meek. She graduated from Kent City High School in 1946 and from the Hackley Hospital School of Nursing in Muskegon in 1949. She met her future husband, Waldo Keating, while working as a nurse at the health center at Central Michigan University. They married on June 23, 1950, moved to Muskegon, and raised their eight children. The family moved to Traverse City in 1971. Marcia went back to nursing in 1972 at the Traverse City Osteopathic Hospital, where she worked for 19 years. She was a medical/surgical nurse, and worked in Discharge Planning, Quality Assurance, and Diabetic Teaching. She served on the Traverse City District Nurses continuing education committee, was a member of the Michigan Nurses Association, and president of North Central Region Utilization Review Coordinators Association. In 1977, the District Nurses recognized her as Nurse of the Year. In 1987, she co-authored an article in the journal Patient Education and Counseling, “The nurse specialist: An opportunity to improve patient education.” In 1991, she retired from Osteopathic Hospital and founded the parish nurse program at St. Francis Church, with an emphasis on grief counseling and support. Marcia was an associate of the Sisters of Mercy and an Eucharistic Minister. Marcia loved crossword puzzles, card games, knitting, and old movies. Her musical talents included playing the bassoon and piano. She enjoyed spending summers with Waldo and her family at their cottage on Walloon Lake. Marcia was preceded in death by her parents, three siblings, Virginia, Bob, and Remi, and her husband of 59 years, Waldo, who passed on June 11, 2009. She is survived by her eight children, Patricia (Charles) Brumbaugh, Deborah Anderson, Linda (Joseph) Watt, Mary (Timothy) O’Callaghan, Michael Keating, Peggy (John) Anderson, Laura Keating (Steve Bayne), and Robert Keating (Joseph Klingman), and by her thirteen grandchildren and two great-grandchildren, with a third on the way. Marcia will be remembered for her sense of humor and philosophical insights. She raised her children to be hard-working, to think for themselves, and to do their best at whatever path they chose. And for this Mom, we thank you. We will miss you. We would like to thank the staff at French Manor and the Grand Traverse Pavilions for the compassionate care given to our mother in the last year. Visitation will be held from 4 to 7 p.m., on Monday, Dec. 29, at Reynolds-Jonkhoff Funeral Home with a vigil service at 7 p.m. A Funeral Mass will be held at 11 a.m., on Tuesday, Dec. 30, at St. Francis Catholic Church. In lieu of flowers, please consider donations to the Sisters of Mercy, 29000 W. 11 Mile Rd, Farmington Hills, MI 48336, or to the Waldo Keating Memorial Scholarship Fund at St. Francis High School. Please Visit www.reynolds-jonkhoff.com to share your memories of Marcia with her family.

The family of Marcia Keating created this Life Tributes page to make it easy to share your memories.