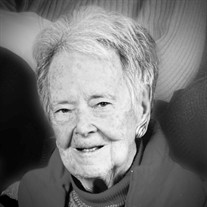 Marcia Marie Owens Lynch, born November 18, 1925, in a “holler” in eastern Kentucky to Loretta Hale Owens and Jason N. Owens, left this earthly life on February 2, 2021. The middle child of a loving family, Marcia was preceded in death by her parents, her older sister, Frances Mae Foreman, and very recently, by her younger brother, James William Owens. Marcia and Frances took a taxi to and from school in Hazard, Kentucky every day, from the coal mining area where their father managed the company store, and where their mother did the accounting for the company. Marcia earned a B.A. in Business Administration from Centre College in Danville, Kentucky, where she met her former husband, William K. Lynch (deceased) who was attending Centre on the GI Bill. They stayed in Danville until Bill finished college, and then moved to live and work in Bill’s native Michigan. Even in the 1940s it could be tough to find a good job in Traverse City, so after a brief stint in northern Michigan they relocated to Saginaw where their older daughter, Bryn Lynch Lelandais, was born. By the time Pamela Sue Lynch came along a few years later, they were back in Traverse City, having designed and built their dream home where Marcia lived until her passing. Marcia was the last of the original home owners on the street. Marcia was very active in volunteer activities as a young mother, though she truly missed working outside the home. Bryn and Pam are eternally grateful that she decided to become a mother, because she was a spectacular one! She was always there to lend a hand, an ear, or a shoulder to cry on. Marcia was president of the Parent-Teacher Association at Eastern Elementary, as well as the president of the Traverse City area PTA council. Additionally she showed her community volunteerism by being on the boards of the YMCA and of Family and Childcare Services, and supported her children by participating as a Brownie Girl Scout leader, room mother, and chauffeur to countless tennis and gymnastic meets. One day in the 1970s a good family friend, orthodontist Dr. Arne Sarya, asked her to manage Glacier Arena and she was back in the work force for another 40 years. When Glacier Arena closed, Marcia worked at Dr. Sarya’s orthodontist office for nearly 30 years, managing the insurance end of the business. When she wasn’t working she played Thelma to Millicent Savage’s Louise, traveled, and got into more mischief than her children would care to know about. Marcia, Millicent, Sally Dye, Marian Epting, Barb Gilmore, Van Johnson, Betty Kuhn, Connie Sarya, Shirley Vansumeren and Greta Wilcox played bridge for nearly 50 years. Between bidding on their cards, eating dessert, and trying to keep the hostess’ children away from the conversation, Bridge Club kept track of the comings and goings of their children, their children’s friends, and anyone else who ventured on their radar. Marcia is survived by her daughters, Bryn and Pam; grandchildren Alyson (Brendan) Lelandais McGugin, Emily Lelandais (Matthew Dorazio), Faith Lynch, Isaac Lynch; great-granddaughter, Abigail McGugin; many nieces and nephews, as well as granddogs and kitties. Reynolds-Jonkhoff Funeral home is caring for the family. Cremation has taken place, and a memorial service will be held Memorial Day weekend. Interment will be at the family plot in the Englewood Cemetery in Hazard, Kentucky, at a later date. In lieu of flowers, please consider a donation to the Cowell Family Cancer Center, the Cherryland Humane Society, or a charity of your choice. You may visit Marcia’s tribute page at www.reynolds-jonkhoff.com

The family of Marcia Marie Lynch created this Life Tributes page to make it easy to share your memories.