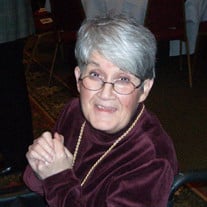 MARCIA JEANNE BULMER MANSEAU After a twenty-three year long and gallant battle with Multiple Sclerosis, Marcy Manseau peacefully succumbed, surrounded by her family on October 6, 2015. Marcia Jeanne Bulmer was born to Edgar Gerrard and Jeanne Smith Bulmer, in Ottawa, Ontario on October 16, 1944, while her Father was serving in the RCAF. She grew up in Oakville, Ontario attending schools there, before graduating from High School in Windsor. After attending Wayne State University, Marcy worked for American Airlines in Detroit and Washington, D. C. before moving to Traverse City in 1972. In Traverse City, she embarked upon a new career as a travel agent, first, briefly, with MTA, and then for a long career with Viktor Weyand Travel. She retired from Andrew Kan Travel in 2000. Marcy was a travel expert, who had been everywhere, and delighted in sending her hundreds of loyal clients all over the world to enjoy the experience as much as she did. Her other "career" was as a political operative, working on, or chairing many State, County, City, and School Board campaigns. An unrepentant liberal, Marcy was a loyal Democrat, but also worked for candidates in non-partisan races, as long as they held to the same beliefs that she did! She enjoyed good company, good food and wine, the Sixth Street Bridge Club, and her weekly Wednesday lunches with her many friends, where the latest political foibles were happily dissected and commented upon. Marcy was never shy in stating her opinion and, while her volume may have diminished in the last couple of years, her fervor never did. Marcy is survived by her husband Fred Nelson, her two sons, Jamie (Karen) Wygle and Ted (Mitch Anderson) Manseau, her brother John (Tina) Bulmer, his Children Curt (MJ) Bulmer, Krista Bulmer, and Riley (Billie Jo) Bulmer. Also surviving are her sister-in-law Martha Blenkorn, her daughters Sara and Leighann, and Fred's brother Tom (Darlene) Nelson, and sister Virginia(Nancy Busch) Nelson. She was preceded in death by her parents, her sister Penny Wygle, her brother-in-law Alan Blenkhorn, and her first husband Joseph Manseau. As per Marcy's wishes, cremation has taken place, and there will be no formal service. A visitation will be held at Reynolds-Jonkhoff Funeral home on Thursday, October 8 from 5 to 8 PM. Memorials may be directed to the Father Fred Foundation, or to the NMC Foundation. The family is being served by Reynolds-Jonkhoff Funeral Home and Cremation Services.

The family of Marcia Jeanne Bulmer Manseau created this Life Tributes page to make it easy to share your memories.

MARCIA JEANNE BULMER MANSEAU
After a twenty-three year long and...