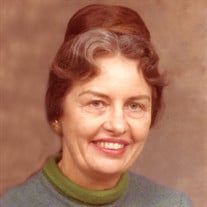 TRAVERSE CITY – Margaret Ann “Peggy” Ferguson, 94, of Traverse City, passed away on Friday Feb. 17, 2017 at the Grand Traverse Pavilions. Peggy was born on March 14, 1922 in Findlay, OH, to her parents Ernest W. and Olive (Young) McCall and was one of 3 daughters. Peggy graduated from Findlay High School, and received a B.A. degree from Muskingum College, and her graduate work at Bowling Green State University where she earned a Masters Degree. She was a school teacher and librarian for 20 years with Donnell Jr. High School in Findlay, Ohio. Upon retiring in 1984 she moved to the Traverse City area. She married David A. Ferguson on June 13, 1944 in Findlay OH., and the couple raised a daughter and two sons together. Peggy enjoyed reading, knitting and needlepoint, gardening, camping, traveling and church activities at the Presbyterian Church of Traverse City. Peggy was a member of P.E.O., Child Conservation League, Ladies Hospital Auxiliary, Elder at Presbyterian Church, and Campfire Girls. She was a devoted wife, mother and grandmother, who always put others first and put her trust in God foremost. Peggy is survived by her children, David E. (Donna) Ferguson of Lander WY., Ann E. (Rick deceased) Hileman, Bob L. (Megan) Ferguson, of Marengo, OH.; grandchildren, Michelle Gomez, Mike Hileman, David Lee Ferguson, Emily Hargrove and Andy Ferguson; 9 great grandchildren; sister, Nancy Morris (Paul) of Traverse City. She was preceded in death by her parents; husband, David A. Ferguson (7/2/ 2001) and a sister, Dorothy Shadle. A memorial service will be held at 11:00 a.m. on June 17, 2017 at the Presbyterian Church of Traverse City with a visitation held one hour prior. A luncheon will follow the service. In lieu of flowers memorial contributions in Peggy’s name may be directed to The Presbyterian Church of Traverse City. Please share your thoughts and memories with Peggy’s family by way of her online guestbook at www.reynolds-jonkoff.com. The family is being cared for by the Reynolds-Jonkhoff Funeral Home and Cremation Services.

The family of Margaret Ann Ferguson created this Life Tributes page to make it easy to share your memories.