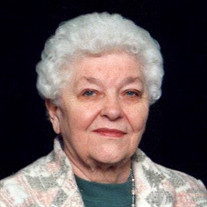 TRAVERSE CITY — Margaret Holczman, 92, of Traverse City, passed away on Sept. 22, 2015. Margaret was born on May 29, 1923 in Hamtramck, to the late Simon and Marie (Czenski) Prechesky. She married Vincent J. Holczman on Jan. 18, 1941 in Dearborn. They had six children together and celebrated 58 years of marriage. Margaret worked at Fisher Body in Flint. The couple resided in Ovid, where they owned and operated a tv and radio business. In 1969, they relocated to Traverse City where they owned and managed the Flintstone Bar together. Margaret was an active member of St. Patrick Catholic Church and auxiliary member of the VFW. She enjoyed reading, crocheting and knitting, gardening and growing her beloved irises. She is survived by her children, Elaine (Orin) Hart, of Davison, Shirley (Larry) Shaw, of Lansing, Barb (Garry) Evens, of Boon, Penny (Rick) Kane, of Florida, Adam (Patty) Holczman, of Grawn, Tom Holczman, of Grawn; 15 grandchildren; 29 great-grandchildren; and six great-great-grandchildren. Margaret was preceded in death by her husband, Vincent Holczman in 1999; sisters, Helen Mijal, Patricia Drazen, Bernice Iwaniec; brothers, John Prechesky and Raymond Prechesky. A memorial service will be held at the Reynolds-Jonkhoff Funeral Home on Monday, Sept. 28 at 11 a.m., with visitation held one hour prior. Interment will follow the service at Grand Traverse Memorial Gardens. Memorial contributions in Margaret’s name may be directed to the Diabetes Association and St. Patrick Catholic Church for Mass intentions. Kindly share your memories with Margaret’s family by way of her online guestbook at www.reynolds-jonkhoff.com. The family is being cared for by the Reynolds Jonkhoff Funeral Home and Cremation Services.

The family of Margaret Holczman created this Life Tributes page to make it easy to share your memories.