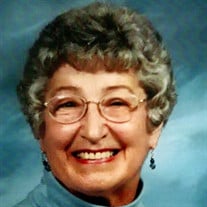 Margaret Marie Knapp, 97, beloved wife, mother, grandmother and great-grandmother of Williamsburg passed away Saturday, May 7 at Hospice House in Traverse City. Margaret was born November 23, 1924 in O’Fallon, Illinois, the daughter of David and Bertha Lawrence. She attended O’Fallon public schools and after graduation worked as a secretary in St. Louis, Missouri. Shortly she was swept off her feet (literally) when she met Harold Woodhouse who was stationed at Scott Air Force Base nearby. Many of their dates were in St. Louis dancing. On January 1, 1944, they married. When he finished his tour in the Air Force, they moved to North Muskegon, Michigan and then moved to Traverse City after “Woody” was offered a position as manager of the new store for Fitzpatrick Electric Company of Muskegon. Their family grew to five with the birth of two daughters (Sherry and Candy) and one son (David Gerald). A stay-at-home mom, Margaret was involved in many of her children’s activities including Brownie and Girl Scouts and Rainbow Girls. She was an accomplished seamstress and made many of her daughters’ clothes as well as her own. When Woody died unexpectedly in 1962, she continued raising her children as a single mother. Margaret was a member of Central United Methodist Church for over 70 years. She was a Sunday School teacher, children’s Melody Choir Director, member of the Chancel Choir, Church Secretary and Office Manager, a Stephen Minister and served on many committees. She loved her church and the people she met there over the years. She made it her personal ministry to contact church members to wish them a Happy Birthday on their special day. The 43rd Annual Messiah Sing at Central was dedicated to her on December 5, 2021. She participated in many Sings. On June 28, 1980, she married Phil Knapp. During Phil’s employment with State Farm Insurance they traveled within the United States as well as abroad. They later enjoyed many road trips to Alaska. They loved living in Williamsburg and enjoyed a spectacular view of Elk Lake. Margaret will be missed by her husband Phil Knapp; children Sherry Woodhouse (David) Feiger of John Day, Oregon; Candy Woodhouse Hughes of Interlochen and David Woodhouse of Boyne Falls. Stepchildren: John (Maryann Kotwicki) Knapp of Alpena, Tim (Dawn) Knapp of East Tawas, Marnie (Joe) Lane of Traverse City and Vince (Sarah) Knapp of Troy, Ohio. Grandchildren Mike Feiger, Jim Feiger, and Evan Woodhouse, D.J. (Charlene) Knapp, Kyle (Laura) Knapp, Taylor (Cassandra) Knapp , Payton Knapp, Claire Lane, Rebecca Lane, Connor Knapp, Faith Knapp, Gabe, Gavin and Grace Wolf. Great grandchildren Cooper, Landon, Micah and Harper Knapp. Margaret was preceded in death by her first husband, Harold Woodhouse; her parents David and Bertha Lawrence; brother Glenn C. Lawrence and sister-in-law Viola, and nephew, Ron Lawrence. A celebration of Margaret’s life will be held on Saturday, May 21st, 2022, 12 noon at Central United Methodist Church...with visitation beginning at 11:00 a.m. In remembering her, Margaret would want people to smile, share love with all, give to someone who is in need, spend time with and listen to a child, love your family, laugh, dance, sing and without hesitation .....”Trust Jesus.” Those who wish may make contributions in Margaret’s memory to Central United Methodist Church/Ukraine Relief.

The family of Margaret Marie Knapp created this Life Tributes page to make it easy to share your memories.