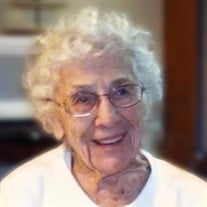 TRAVERSE CITY - Margaret Rose Kozan, 98, of Traverse City, Northport, and Mesa, Arizona, passed away August 12, 2015 at Munson Hospice House in Traverse City. She was born on December 18, 1916 in Highland Park, MI, to her parents Louis and Rose (Timina) Lemak. She graduated from Highland Park High School in 1934, and later met and married Stephan Kozan on April 27, 1935, and they both loved to travel and did extensively in the USA, Canada, and Europe. They celebrated 72 years of marriage until Stephen passed away on July 7, 2007. Margaret was a retired nurse but continued to keep her hand in nursing through volunteering for the Michigan Cancer Foundation in many capacities, plus actively volunteering in Mesa, Arizona. She was a devoted wife and mother and took great pleasure spending time with her children, grandchildren, great-grandchildren. She will be greatly missed by her family and many friends. She is survived by her children; son Stephan (Louise) Kozan of Eastport; daughter, Kathleen Lake of Grand Blanc; her grandchildren, Stephen (Alison) Kozan, of Traverse City, Christopher (Jill) Lake, of Grand Blanc, Jennifer (Kevin) Poehlman, of Waterford, MI, and great grandchildren, Alex, Brandon, Owen, Blake, and Natalie Grace. She was preceded in death by her husband Stephen; her parents, Rose and Louis; and her brothers, Hank and Louie. There will be no memorial service per Margaret's wishes. In lieu of flowers, please consider contributions in Margaret's name directed to Munson Hospice House, 1150 Medical Campus Drive, Traverse City, MI.,49684. Please share you thoughts and memories with Margaret's family by way of her online guestbook at www.reynolds-jonkhoff.com. The family is being cared for by Reynolds-Jonkhoff Funeral Home and Cremation Services.

TRAVERSE CITY - Margaret Rose Kozan, 98, of Traverse City, Northport, and Mesa, Arizona, passed away August 12, 2015 at Munson Hospice House in Traverse City. She was born on December 18, 1916 in Highland Park, MI, to her parents Louis and... View Obituary & Service Information

The family of Margaret Rose Kozan created this Life Tributes page to make it easy to share your memories.