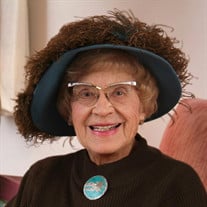 Margaret Azelia “Peg” Simmons, 105 of Traverse City passed away peacefully January 20, 2016 at the Grand Traverse Pavilions. Peg was born on May 29, 1910 in Leamington, Ontario, Canada to the late David P. and Rose (Rabior) Campbell. On July 29, 1944 Peg married Frank Gordon “Gordy” Simmons in Virginia. Together they celebrated 60 years of marriage before he passed away in 2004. In her early years Peg worked at Western Union and was transferred to Seattle, Washington. It was there, where she received the first alert, that Pearl Harbor was being bombed. Peg was hired away from Western Union, by Bell Telephone, to help run the phone system for the military in Anchorage, Alaska. While in Anchorage, she met the love of her life, Gordon Simmons. They married and moved to Pea Pack, NJ, and in 1981 moved to Traverse City. Here she developed many close friendships and was very active in the community. She was active in the Kiwanis Club of Traverse City, the Ma-Ma-Ne-Sewong Garden Club and the Elks Lodge. She was also active at the Grand Traverse Pavilions where she served as a senior trustee for the board and a volunteer. She was renown for her homemade brownies, selling one batch at a fundraiser for $1,000! Peg was also a volunteer for the American Red Cross and was recognized by the national office in 1985 as lifetime member. Peg also enjoyed volunteering for the City Opera House where she hosted fundraising events like the Chocolate Extravaganza and Lilac Tea. As a result of her dedication to the community she received the Empire Bank Good Neighbor award, the 2007 Distinguished Senior Award for the National Cherry Festival, the 2005 Zonta Woman of the Year, and the 2008 Rotary Paul Harris Award. Peg was preceded in death by her husband Gordy and her son Frank “Griff” Simmons. Peg is survived by a daughter Lizanne (Ronald) Johnson, 2 grandchildren & 3 great grandchildren and many special close friends. A visitation will be held on Friday, January 22, 2016 from 6 to 8 pm at the Reynolds-Jonkhoff Funeral Home. The funeral service celebrating Peg’s life will take place on Saturday, January 23, 2016 at 11:00 am also at the funeral home. Graveside services will take place in the spring at Oakwood Cemetery in Higgins Lake. A gathering will follow the funeral service at Boone’s Long Lake Inn where she was a frequent patron. Memorial contributions may be directed to the American Red Cross. Please visit www.reynolds-jonkhoff.com to share your memories with the family. The family is being cared for by Reynolds-Jonkhoff Funeral Home.

The family of Margaret "Peg" A. Simmons created this Life Tributes page to make it easy to share your memories.