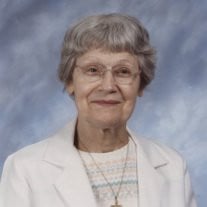 Margaret G. "Margie" Savage, 91, a life resident of the Traverse City area passed away peacefully Monday, July 01, 2013 at Cherry Hill Haven in Traverse City. Margaret was born on Sunday, November 27, 1921 to the late Francis and Bertha (Boone) Winowiecki in Bingham Township, MI. She married Allen Savage on Monday, January 7, 1946 at Holy Rosary Catholic Church in Cedar. He preceded her in death in 1999. A woman of tremendous faith, Margaret had been a member of St Francis Parish since 1947. Following her retirement from Burwoods and Burke Flexo, she devoted herself to the work of the church, serving as a Eucharistic Minister for many many years, delivering communion to shut ins at home and serving communion to all four floors of the old Grand Traverse Medical Care Facility every Sunday. Upon retirement, Margaret attended mass every day, leading the rosary before every mass. Even as she developed Alzheimers Disease in recent years, she still ministered to those around her in her own quiet way and would encourage others with her simple phrase of "I'll pray for you", which she did. Margaret is survived by her daughter, Linda (Len) Ritola; her grandchildren, DiAnna Ritola, Nancee (Casey) Pond, Andy (Christy) Ritola, Mary (Chris) McKillip, Joe (Tonya) Ritola and Brenden Ritola; 13 great grandchildren; her siblings, Sister Mary Marita; Dorothy Stites; Theresa Weber, Martha Larkins and Jackie Clark; many nieces and nephews including 2 nephews who were more like brothers to Margaret, Jimmy Winowiecki and David Winowiecki who is deceased. Also preceding Margaret in death were her parents, her husband and her siblings, Lillian Stefaniak, Mary Flees, Irene Mitchell Lardie, Frances Mitchell, Frank Winowiecki, Agnes Panek and Tony Winowiecki. Visitation for friends and family will be held at the Reynolds-Jonkhoff Funeral Home from 4 p. m. until 6 p.m. Thursday, July 4 with the Rosary being prayed at 5 p.m. by Margaret's long time friend Hilda Maslowski. The Funeral Mass will be celebrated at 11:30 a.m. Friday, July 5 at St. Francis Catholic Church with The Rev. Fr. Ken Stachnik presiding. Burial will be in Oakwood Catholic Diocesan Cemetery. Rather than flowers, Margaret would have appreciated being remembered through Mass Intentions or by a contribution to The Pregnancy Care Center, as she always had a great love for babies. The family extends their special thanks to the loving caregivers at Cherry Hill Haven II.

The family of Margaret G. Savage created this Life Tributes page to make it easy to share your memories.

Margaret G. &quot;Margie&quot; Savage, 91, a life resident of the Traverse...