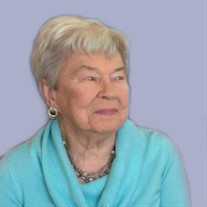 Margaret Louise Westie passed away on November 27, 2021 in Traverse City, MI, six months shy of the 100th birthday party she had been planning. She died at Munson Hospice House, where she received exceptional care during a brief battle with cancer. Margaret was born May 21, 1922. She grew up in Bay City, Michigan, the daughter of John and Mary Blum. She graduated from Central Michigan University, where she met her husband, Dr. Frank Westie. They married in 1944, and enjoyed 60 years of marriage until his death in 2004. In the early years of their marriage Margaret worked as a high school teacher and social worker, while Frank served as a B-17 pilot in WWII. After the war Margaret and Frank went to Ohio State University for doctoral work, where she completed all but her dissertation toward a Ph.D. in sociology. They then moved to Bloomington, Indiana where Frank became a professor of sociology at Indiana University and where she raised her family for over 30 years. Margaret was a scholar, working on sociological research and publishing with her husband. She also was very much involved behind the scenes in real estate development with her husband and their partner, Ray Murray, resulting in the Inverness Woods and Inverness Farms developments in Bloomington. Margaret and Frank enjoyed restoring their Civil War era log house, and later building their dream home in Inverness Woods. In the early 1970’s they bought “The Crystal Cottage” on Little Fisher Lake in Glen Arbor, MI, where they spent summers and eventually called home. After Frank retired, they spent the winter months in Arizona, but ultimately bought a condo in Naples, FL where they spent winters for many years. After Frank died in 2004, Margaret continued living in Naples and Glen Arbor until 2012. She then moved to the Glen Eagle Retirement Community nearby in Traverse City, MI where she enjoyed many friendships. In 2020, after taking a few falls, she moved to Traverse Manor assisted living, where she lived until September, when she went to Munson Hospice House. Margaret was known for her bright smile and sunny disposition. Margaret and Frank had an expansive network of valued friendships that spanned the globe. Many of Frank’s graduate students became part of the Westie family, recipients of the good cooking and hospitality for which Margaret was widely known. She was the consummate Indiana University football and basketball fan, rarely missing a game whether in person or on TV for over 70 years, right up to the last weeks of her life. Margaret was also an animal lover. Dogs and cats were always a part of the family, as well as the occasional rescue animal. “Big Mouth”, the fledgling starling she rescued and raised, was known to swoop down from the trees and land on an unsuspecting visitor’s head. Margaret always had the most beautiful gardens and most active bird feeders. However, more than anything, Margaret was a devoted wife, mother, grandmother and great-grandmother. She forged close relationships with her brothers-in-law, sisters-in law, nieces and nephews and their families from both the Westie and Blum side of the family. She made sure her children were well educated, provided with college and graduate school educations and much imparted wisdom. She was there for them through all of life’s joys and challenges with exceptional love and patience. We were the lucky ones. Margaret was predeceased by her parents, husband, sister Joan (Leonard) Pecchia, brother Bill Blum, step-daughter Joanna Westie (Richard) Gell, grandson Benjamin Wiesen and son-in-law Fred Tasker. She is survived by three children, Dr. Katharine Westie Tasker, Kurt Westie, and Anne (Daniel) Wiesen. She loved her sons-in-law, Dan, Fred and Rich, and the feeling was mutual. She adored her 8 grandchildren and their spouses, and her 11 beloved great-grandchildren. She will be missed by her nieces and nephews and their families, who meant so much to her. She also leaves behind her faithful companion dog, Sophie, who brought her much happiness and was by her side to the end. The family wishes to thank Traverse Manor and Munson Hospice House for the excellent care they provided Margaret. A memorial service will be held for Margaret in June. Donations in her memory may be made to Munson Hospice House, 450 Brook Street, Traverse City, MI 49684 or the St. Labre Indian School, PO Box Ashland, MT 59004 (www.stlabre.org).

Margaret Louise Westie passed away on November 27, 2021 in Traverse City, MI, six months shy of the 100th birthday party she had been planning. She died at Munson Hospice House, where she received exceptional care during a brief battle with... View Obituary & Service Information

The family of Margaret Louise Westie created this Life Tributes page to make it easy to share your memories.

Margaret Louise Westie passed away on November 27, 2021 in Traverse...