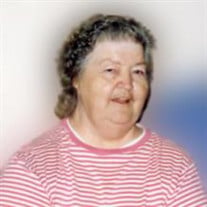 Marguerite Caroline Wemple, 81, of Traverse City passed away on Thursday, September 3, 2015 at her home. Marguerite was born on March 5, 1934 in Manistee, Michigan to the late Thomas McKinley and Sigrid Emily (Hansen) Wheeler. She was married to Frederick Wemple on December 19, 1975 in Traverse City. Marguerite moved to Traverse City from Manistee in 1952. She had been employed by the Super 8 in Traverse City until her retirement. She was a member of Salvation Army Church. Marguerite was a great cook her family will miss her potato salad. She loved to can, earlier in life she enjoyed entering her canned goods in the Fair, from which she received many awards. Marguerite also enjoyed spending time with Fred at his cabin, her cat “Smokey”, good country music, family reunions, bingo, crocheting, needlepoint and going to yard sales. Marguerite is survived by two sons; David (Pam) Smith of Fife Lake and Joseph (Diane) Smith of Traverse City, a son-in-law, Rick Radcliffe of Grawn, two brothers; Gerald (Dorothy) Wheeler of Stevensville, Sonny (Carol) Wheeler of Manistee, and two sisters; Mary Smith of Traverse City and Marion Landenberg of Georgia and a sister-in-law, Maxine Wheeler of Onekama. Also surviving are 12 grandchildren, 17 great-grandchildren and five great-grandchildren, as well as many nieces and nephews. She was preceded in death by her husband, Frederick Wemple, two sons; Douglas Smith and Michael Smith, a daughter, Debra Radcliffe, three brothers, Jean Wheeler, Howard Wheeler and Thomas Wheeler and two sisters; Mildred Harrington and Marie Wheeler. A memorial service honoring Marguerite will take place at 11:00a.m. on Saturday, September 26, 2015 at The Salvation Army,1239 Barlow St., Traverse City, MI, 49686, with visiting one hour prior. Corps Sergeant Major Mary Vollink will officiate. Those planning an expression of sympathy may wish to consider a memorial donation to The Salvation Army. Please feel free to share your thoughts and memories with Marguerite’s family at www.reynonlds-jonkhoff.com. The family is being cared for by the Reynolds-Jonkhoff Funeral Home and Cremation Services.

Marguerite Caroline Wemple, 81, of Traverse City passed away on Thursday, September 3, 2015 at her home. Marguerite was born on March 5, 1934 in Manistee, Michigan to the late Thomas McKinley and Sigrid Emily (Hansen) Wheeler. She was married... View Obituary & Service Information

The family of Marguerite C. Wemple created this Life Tributes page to make it easy to share your memories.