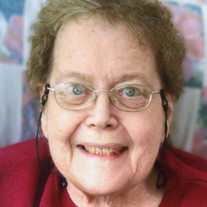 Mariann Dorothy Weber, 75, of Traverse City passed away April 30, 2015 at the Grand Traverse Pavilions. Mariann was born on October 24, 1939 in Buffalo, NY to the late William and Mildred (Gitry) Schultz. Mariann worked at Benton Cards for 10 years in Buffalo before meeting her future husband. On February 16, 1965, Mariann married Donald Weber who preceded her in death in 2006. Mariann and Donald lived as a Coast Guard Family and called Buffalo, NY, Kodiak, AK, and Traverse City, MI their home. Mariann is survived by her daughters Holly (Eric) Moss and Kimberly Weber, five grandchildren Saphrone Seidel, Chase Seidel, Jacob Brown, Ashley Hood and Zachary Hood; special sister-in-law Betty Cyr, and many dear nieces and nephews. “Do Da” was a nanny to the Harry & Patti Day family for 22 years. She had a very special place in their hearts. She was fun, loving and compassionate in her care for all five children, Tony, Markie, Matthew, Danny, and Kelli. For the last 14 months of her life, DoDa was cared for and greatly loved by the exceptional staff at the Grand Traverse Pavilions in the Aspen Wing. She had a Wonderful Life with her new Aspen family, playing bingo, delivering the post, crocheting special crafts for the residents and staff and being a good friend to all. DoDa was so thankful everyday to be able to live in the Aspen Wing with her "new" family. Please consider Grand Traverse Pavilions - Aspen Wing - when making a memorial contribution in her memory. Visitation will be held on Friday, May 29, 2015 at the Reynolds Jonkhoff Funeral Home from 6 to 8 pm. Mass of Christian Burial will take place at 11:00 am on Saturday, May 30, 2015 at St. Francis Catholic Church. Father Ken Stachnik will lead the services.

The family of Mariann D. Weber created this Life Tributes page to make it easy to share your memories.