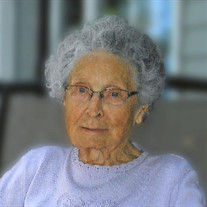 Marie E. Grassa Died November 30, 2015 In the beginning when God scattered stars into space--- He planned treasures for us to discover---like love and life and people like you. (Author unknown- found in Marie’s purse) Marie E. (Magnuson) Grassa, 97 of Traverse City passed away peacefully on Monday, November 30, 2015 at her home overlooking the water surrounded by her loving family. Marie was a gracious lady who brought warmth and wisdom to us all. She believed in children, church, education and family. She will be dearly missed by her loving husband Edmund, married for over 70 years; daughters, Marcia Grassa and Merra Lee Grassa, of Traverse City, Nancy (David) Currie; granddaughters, Jennifer Currie, Jillienne (Steph) Currie-Payant and great grandsons, Curtis and Marcus Payant of Ottawa, Canada. Marie was the happiest when spending time with family and helping her community and fellow educators. Marie’s first teaching years were spent in one-room schools in Ottawa County where she met and married Edmund C. Grassa who was also teaching. After Edmund completed four years of military service and finished his degree requirements at Hope College, they moved to Traverse City. Marie was a substitute teacher prior to starting a family. For 10 years, Marie’s teaching was done at home. She returned to the classroom and retired in 1981 after 30 years of teaching. Traverse City Area Public Schools played an important part in her life. Marie valued and promoted public education and was a proud member of MEA-R. Marie became a member of The Delta Kappa Gamma Society International in 1963. It meant a great deal to her, and she was happy to serve whenever needed. She worked on many committees at the chapter level and served as Phi-Chapter President 1968-1970 and 1978-1980. During her presidency, she assisted in the organization and installation of a new chapter in the Petoskey area. At the state level, Marie was the Personal Growth and Services Committee chairman and helped to establish the Woman of Distinction award. She also served as chairman of the Regional and Convention Hostesses Committee. Marie was elected Second Vice President from 1977-1979, and she became Alpha Iota State President in 1981-1983. The local Phi Chapter established a Teacher to Teacher Grant to fund special projects and/or continuing education for teachers. In 2015 the grant was renamed the Marie Grassa Teacher to Teacher Grant. Marie found time to work actively at Central United Methodist Church and Munson Hospital. She enjoyed singing in the Chancel Choir. Marie was honored to serve as president of the Munson Auxiliary 1988-1989. Marie loved wintering in Florida and spending time with special friends and family. She liked walking the beach and collecting special treasures. The family wishes to extend a sincere thank you to their wonderful in-home caregivers and to the assistance they received from Munson Hospice. In remembrance of Marie, memorials may be directed to Central United Methodist Church (Music Programs) 222 Cass Street, Traverse City, MI 49684 or to Delta Kappa Gamma (Teacher to Teacher Grant), DKG c/o Alicia Sanford, 945 Dracka Rd., Traverse City, MI 49685. Cremation has taken place. Kindly share thoughts and memories with Marie’s family at www.reynolds-jonkhoff.com. The family is being cared for by the Reynolds-Jonkhoff Funeral Home.

The family of Marie E. Grassa created this Life Tributes page to make it easy to share your memories.

In the beginning when...