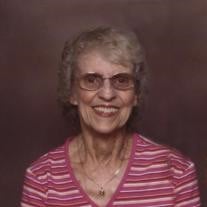 Traverse City-Marie Joy Morrison, 75, a Traverse City native, died Thursday morning, November 29, 2012, at Grand Traverse Pavilions. Born August 3, 1937, in Traverse City, she was the daughter of the late Theodore and Hazel (Lewis) Stricker. Marie was a long time member of Central United Methodist Church. Prior to her retirement, she was employed by Tom's Food Market-West Bay, where she thoroughly enjoyed providing great service and interacting with her customers. Marie's family met the world to her, they were the central focus of her life. She will be truly missed. Marie is survived by her caring and supportive family; daughter, Joni Marie (Rodney) Moore, of Traverse City; son, Bill (Rhonda) Morrison, of Williamsburg; grandchildren, Robert (Karen) Phillips, of Newton, TX, Christopher Phillips, of Traverse City and Jason Morrison ,of Elk Rapids; four great grandchildren; Caitlin, Robby, Caleb and Keegan; brothers, Wayne (Myrna) Stricker, of Traverse City, Carl (Bev) Stricker, of TX; and Jerry (Rickey) Stricker, of Traverse City; along with many nieces and nephews. The family will receive friends at the Reynolds-Jonkhoff Funeral Home on Monday, December 3, 2012, from 6:00 P.M. to 8:00 P.M. Funeral Services will be held at Central United Methodist Church on Tuesday, December 4, 2012, at 11:00 A.M. Pastor Christopher Lang will officiate. Following cremation, her cremated remains will be buried at Yuba Cemetery, next to her precious grandson, Michael. In remembrance of Marie, memorials may be directed to . Kindly share your memories with the family on their online guest book at www.reynolds-jonkhoff.com Arrangements were made with the Reynolds-Jonkhoff Funeral Home and Cremation Services.

The family of Marie Joy Morrison created this Life Tributes page to make it easy to share your memories.