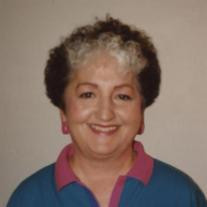 Marilyn G. Gray Marilyn Gail Marie Gray, 76, of Traverse City, passed away peacefully on Monday May 28, 2012 at Munson Hospice House surrounded by her loving family. Marilyn was born on February 14, 1936, in Gladstone, Michigan to the late Herman and Wilhelmina Leona (Turgeon) Groleau. She grew up in Muskegon and graduated from Muskegon Heights High School in 1954. Every summer Marilyn visited her cousins in Williamsburg Michigan, and there she met the love of her life, Basil Gray, whom she married on September 29, 1956. They moved to Sault Ste. Marie Michigan where Basil was stationed in the Air Force. Over the next nine years, their four daughters were born. From there they traveled to France and England, Texas and South Dakota prior to Basil’s retirement and move to Traverse City in 1973. Marilyn worked at Northwestern Michigan College in the Social Science Division for 16 years and retired from her position as Office Manager in 1998. While there Marilyn earned her Associate’s Degree in Liberal Arts. Active, energetic, and always organized, Marilyn could breathe new life into a project or cause and was well known and loved. Music, laughter and Marilyn went hand in hand. Beautiful and always stylish, Marilyn would light up a room the moment she entered. The piano was Marilyn’s greatest talent. She could play progressive jazz, the classics, and pound out a boogie that got the place jumping. Marilyn played the piano at her father’s tavern, Pee Wee’s Bar and Grill, in Nunica Michigan starting at the age of 15. Like her father before her, she was a wonderful performer, and was as much fun to watch as she was to listen to. Music, fun, and Marilyn’s feisty sense of humor knit together every holiday, occasion and family gathering. Thanksgivings for huge crowds, platters of spaghetti with her famous sauce, the memorable baked beans and lemon meringue pie. Singing and music always followed and she filled our lives with happy times and gave us something to share forever. Marilyn’s family was very important to her. She developed close, intimate relationships and everyone who knew her has a special story to tell. Marilyn loved games and was an excellent Bridge player. She also enjoyed board games and jigsaw puzzles with Basil, her children and grandchildren. Surviving Marilyn is her husband, Basil I. Gray, her daughters Sharon (Steven Kaplan) Gray of Milwaukee, Susan (Brian) Ritchie of Seattle, WA, Nancy Gray of Traverse City, Carolyn (Scott Becker) Gray of Seattle WA, grandchildren Bethany (John Richards) and John Stormer, Benjamin and Lydia Ritchie, Basil E. Gray, great grandchild Franklin (Frankie) Richards, sister Meredith (Ray) Brown, brothers Daniel (Carol), Douglas, and David Groleau, and her dear niece Renee Gemmill. She is preceded in death by her parents and her granddaughter Emily Ann Ritchie. The family would like to extend a special recognition to Dr. Brian Lishawa of Munson Medical Center. He brought peace, understanding and compassion in helping Marilyn to complete her journey. Funeral service will be held in the chapel at the Reynolds-Jonkhoff at 3:30PM on Saturday June 2, 2012. A reception will follow at the Elks Lodge in Traverse City beginning at 5:00PM. In lieu of flowers please contribute in Marilyn’s memory to the charity of your choice. Arrangements are by the Reynolds-Jonkhoff Funeral Home.

Marilyn G. Gray Marilyn Gail Marie Gray, 76, of Traverse City, passed away peacefully on Monday May 28, 2012 at Munson Hospice House surrounded by her loving family. Marilyn was born on February 14, 1936, in Gladstone, Michigan to the late... View Obituary & Service Information

The family of Mrs Marilyn G. Gray created this Life Tributes page to make it easy to share your memories.