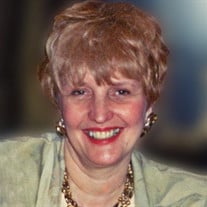 Marilyn Frances McCormick passed over to the peace and joy of eternal life with our loving God and the angels and all good people on Saturday, October 6, 2018 after a month under the caring staff at Munson Medical Center and the Grand Traverse Pavilions in Traverse City. She was 76 years old. Born on November 9, 1941 to Oscar and Virginia Torina in Detroit, Michigan, she went on to graduate from Michigan State University and later earned her Master’s in the Humanities from Central Michigan University. Marilyn and her loving husband Jim moved Up North to God’s Country in 1969, a year after their marriage in Detroit. She taught the humanities, mainly English literature and religious studies, at St. Francis High School in Traverse City (“Go Glads”) for a generation. She was a dynamic force and made a difference in the lives of hundreds of young women and men. Long after her retirement, she continued to hear from many students who loved her and considered her one of the greatest influences on their lives. This was a great source of satisfaction to her. Marilyn and Jim raised three beloved children, Daniel, Ginny, and David, who will suffer her loss but live with wonderful memories of her forever, as will Ginny’s husband Darric Newman, David’s wife Jieun Lee McCormick, and her treasured grandsons Cameron and Benny Newman. Two special people, Gabriel Gutierrez from Brazil and Fred Otieno from Kenya, have become like sons to Marilyn and Jim. In past years, she served on the board of the local substance abuse treatment center and on the board of the first homeless shelter in Traverse City, as well as being a hospice volunteer. Jim gives her the credit for his 1976 election to the district court. Most of the 200 volunteers were recruited from Marilyn’s friends and colleagues. She remained an avid reader, especially of novels, and participated actively in three book clubs up until her final illness. Marilyn and Jim enjoyed travelling all over the world during their retirement together. She was preceded in death by her mother and father, as well as her brother Fr. Ron Torina, S.J. and her sister Kathleen Murphy. She is survived by her husband Jim, with whom she recently celebrated their 50th anniversary. She is also survived by their three children Daniel, Ginny (Darric), and David (Jieun), and grandsons Cameron and Benny. Her brothers, Mike (Karen) and Rick (Dawn), and her sister Gina (Tom) and their families also survive her. Visitation for Marilyn will take place from 5:00 – 8:00 pm on Wednesday, October 10, 2018 at Saint Kateri Tekakwitha, 2753 N West Bay Shore Drive in Suttons Bay, with a Scripture service beginning at 7:00 pm. A Mass of Christian Burial will be celebrated at 11:00 am on Thursday, October 11, 2018 at Immaculate Conception Church, 308 N Cedar Street in Traverse City, with a visitation beginning at 10:00 am. A luncheon will be held at Immaculate Conception Church immediately following the Mass. Family asks that memorial donations in Marilyn’s honor be directed to Catholic Relief Services for Recovery Operations in Haiti, 228 W. Lexington Street, Baltimore, Maryland 21201 or Saint Kateria Tekakwitha, 2753 N West Bay Shore Drive, Suttons Bay, MI 49682.

Marilyn Frances McCormick passed over to the peace and joy of eternal life with our loving God and the angels and all good people on Saturday, October 6, 2018 after a month under the caring staff at Munson Medical Center and the Grand Traverse... View Obituary & Service Information

The family of Marilyn Frances McCormick created this Life Tributes page to make it easy to share your memories.

Marilyn Frances McCormick passed over to the peace and joy of...