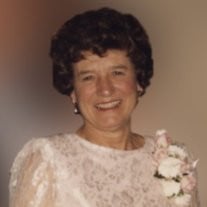 Marilyn Marie Pulcipher, 86, of Traverse City passed away Saturday, April 20, 2013 at Grand Traverse Pavilions, Willow Cottage in Traverse City. Marilyn was born on June 26, 1926 to the late Walter and Marie (Carl) Stiefel in Dimondale, MI. She was a baptized and confirmed member of Christ Lutheran Church in Lansing, MI and continued her Christian Life as an active member of Grace Lutheran Church in Elk Rapids, MI. Her Faith was paramount with constant study and devotion of the word. From an early age she enjoyed the out of doors, participating in 4H livestock projects and assisting on the family farm. She was an exceptional athlete at Sexton High School in Lansing, MI earning the Outstanding Athlete of her Sr. Class. After high school, Marilyn pursued a nursing degree and was employed at Sparrow Hospital in Lansing, as a registered nurse. On September 17, 1955 Marilyn entered into marriage with John Raymond Pulcipher from Williamsburg, MI. Throughout her life ,Marilyn played an active role in managing the family cherry farm. She was an avid gardener and her gardens were admired by many for their sheer beauty and the effort it took to maintain them. Researching the genealogy of both the Pulcipher and Stiefel families was an added hobby and it was noted that Ancestry.com had nothing over Marilyn. She was a devoted mother, wife and grandmother. In addition to her faith in GOD, family was always a priority in her life. Marilyn is survived by her loving husband, John R. Pulcipher of Williamsburg, her son, John (Georgia) Pulcipher of Williamsburg, two daughters; Julie Pulcipher of San Marcos, TX, and Gina (Rich) Griffis of Rockford, MI., five grandchildren, John, Morgan, Jennifer, Megan and Mitchell as well as many other loving family members and friends and will be deeply missed by all. Marilyn was preceded in death by her parents and her brother, Carl Stiefel. Private family funeral services will take place at Grace Lutheran Church in Elk Rapids, with Rev. James Redmann officiating on Thursday April 25th. Burial will be held in Acme Township Cemetery. Memorial contributions may be directed to the Alzheimer's Association, Northwest Michigan Chapter, 921 W. 11th Street, Suite 1W, Traverse City, MI 49684 or Grace Lutheran Church in Elk Rapids.

The family of Marilyn M. Pulcipher created this Life Tributes page to make it easy to share your memories.