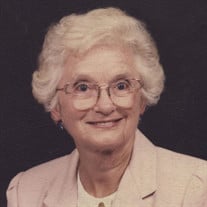 Marion L. Anderson Died May 16,2020 On Dec. 7 1917 Marion was born at home in Northville, Mi to Bina and Arthur Litsenberger. She graduated from Milford High school in 1935. On Christmas Eve in 1938 she married William Holdsworth Sr. They purchased a home in Royal Oak where they lived until Bill joined the Army. Marion moved to Plymouth where she worked for GM. Bill was sent to Germany after the Armistice in Europe. Marion traveled on a converted hospital ship with her three children to join Bill in December, 1946, a rather stormy trip in crowded conditions with sick children and fears of loose mines as they neared the port at Bremerhaven. The family enjoyed their stay in Germany and returned to Michigan less than a year later. Outside of raising her family Marion was always busy. She loved sewing, knitting, and crafts. In High School she had been a member the girls Basketball Team. Now she bowled, square danced, and took up golf, which she continued into her 90’s. She was always a Methodist and for years taught Sunday School and Summer Bible school. From 1948 to 1969, her husband, Bill, was a rising executive with Ford Tractor in Birmingham Mi. They traveled extensively, including a year spent working in England. From 1951 onward they always spent some vacation time at Birch Lake, where they eventually bought a cottage. Bill died in 1969 and she made a difficult transition to her new life. In 1971 she married Kenneth Forston whom she knew from Birch Lake and the Elk Rapids Golf Club. After Ken retired they built a home on Birch Lake and bought a condo in Homosassa Springs Fl. Ken died in 1991. She then met and married Roger Anderson, who also had a home on Birch Lake and spent a happy 5 years together In Michigan and Florida until he died. Marion is survived by her 4 children, William Jr. (Eleanor) Holdsworth, Joanne Kreag (John), Rev. Jacqueline Holdsworth, Robert (Louise) Holdsworth, many grandchildren, and great grandchildren and many others from her marriages to Ken and Roger. The family will hold a celebration of her life in the future and her ashes will be placed beside her first husband.

Marion L. Anderson Died May 16,2020 On Dec. 7 1917 Marion was born at home in Northville, Mi to Bina and Arthur Litsenberger. She graduated from Milford High school in 1935. On Christmas Eve in 1938 she married William Holdsworth Sr. They... View Obituary & Service Information

The family of Marion L. Anderson created this Life Tributes page to make it easy to share your memories.