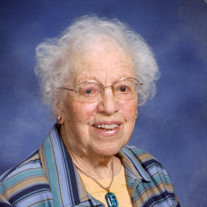 TRAVERSE CITY - Marion Erda Bregi, 100, of Traverse City, formerly of Grosse Pointe Shores, passed away on Oct. 12, 2015. Marion was born on April 29, 1915 in Detroit, Michigan. She was the daughter, and only child, of Gustav and Emma (Manecke) Distler. She graduated from Southeastern High School in Detroit and went on to take training at Detroit Business College and secured employment with Chrysler Corporation as an Executive Secretary. In 1938, she married Ben Bregi and together they enjoyed 57 wonderful years of marriage. They were able to travel the world together and share the friendship of many wonderful people. Marion also enjoyed playing 9-Holers golf at Lochmoor Country Club, volunteering at Bon Secours Hospital, raising beautiful roses and playing Bridge as often as she could get a foursome together. She was a member of Bethlehem Lutheran Church in Traverse City, and a seasonal parishioner at St. Peter’s Lutheran Church on Estero Island, Florida. She also was a member of the Order of the Eastern Star, Jefferson Chapter in Detroit since 1946. Marion was preceded in death by her husband, Ben. She is survived by her son, James (Gail) Bregi of Plymouth, Minnesota; her daughter, Nancy (Ron) Zimmer of Traverse City; grandson, James Bregi, Jr., granddaughters, Anne Rush, Sarah Warren, Mary Schense, Suzanne McGregor, and Laura Ernst. She also has 10 beautiful grandchildren: Eddie, Sadie, Noah, Lauren, Lilianna, Nicholas, Elinor, Jack, Andrew, and Kate. A funeral service honoring Marion’s life will begin at 11 a.m. on Saturday, October 17, at the Reynolds Jonkhoff Funeral Home, with visitation one hour prior to the service. Pastor Paul Busekist of Bethlehem Lutheran Church will officiate. Entombment will take place a Cadillac Memorial Gardens, Clinton Township, Michigan. Memorial contributions in Marion’s name can be made to Hospice of Michigan, Lutheran Social Services of Michigan, 8131 East Jefferson, Detroit, MI., 48214 or Lawrence Technological University Scholarship Fund, 21000 West Ten Mile Rd, Southfield, MI. 48075. Please share memories of Marion with her family by visiting the online guestbook at www.reynolds-jonkhoff.com. The family is being cared for by the Reynolds-Jonkhoff Funeral Home.

TRAVERSE CITY - Marion Erda Bregi, 100, of Traverse City, formerly of Grosse Pointe Shores, passed away on Oct. 12, 2015. Marion was born on April 29, 1915 in Detroit, Michigan. She was the daughter, and only child, of Gustav and Emma (Manecke)... View Obituary & Service Information

The family of Marion E. Bregi created this Life Tributes page to make it easy to share your memories.