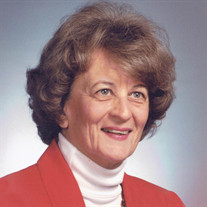 Marion Ghesquiere Schweitzer, passed in peace and went to be with the Lord on January 25, 2019 at the age of 84 at the Grand Traverse Pavilions in Traverse City, MI. Marion was born March 9, 1934 in the Village of Lochmoor, MI, which later became Grosse Pointe Woods, to Alois and Emily (Foster) Ghesquiere. Marion was raised in Grosse Pointe Woods, and graduated from Grosse Pointe (South) High School in 1952. Marion was united in marriage to the love of her life Albert “Al” Schweitzer in 1953. They celebrated over 63 years of marriage before his passing in December of 2016. Marion and Albert were the proud parents of their sons Robert and Gary. Marion worked for Chrysler Corporation before finding her greatest enjoyment as a homemaker. She loved to read, sew, and create a warm and welcoming household for her friends and family. Most of all, Marion was a loving and caring mom to her two boys, always taking time to provide comfort, wisdom and guidance when they needed it. Marion had a great sense of humor and enjoyed making her boys laugh! After Al's retirement, she and Al spent summers at Harsens Island, MI before moving to Traverse City in the early 1990’s. They also enjoyed many winters in Sun City West, AZ where they both performed in the local choir. Marion enjoyed travelling; she and Al traveled extensively throughout their retirement. Due to her kind and gentle personality she was loved by all that she touched; Marion will be sorely missed. Those left to honor her memory include her sons Robert (Diane) and Gary (Dena). Beloved grandchildren, Ethan, Adam, Madison & William and one great-grandson Staszek. A memorial service will be held on Friday, February 1 at noon at the Old Mission Peninsula United Methodist Church. Visitation will begin at 11 AM with a light lunch following the service. Donations may be sent, in lieu of flowers, to Old Mission Peninsula United Methodist Church, 16426 Center Road, Traverse City, MI 49686. Share your thoughts and memories with Marion’s family by way of her online guestbook at www.reynolds-jonkhoff.com. The family is being cared for by the Reynolds-Jonkhoff Funeral Home and Cremation Services.

Marion Ghesquiere Schweitzer, passed in peace and went to be with the Lord on January 25, 2019 at the age of 84 at the Grand Traverse Pavilions in Traverse City, MI. Marion was born March 9, 1934 in the Village of Lochmoor, MI, which later... View Obituary & Service Information

The family of Marion Ghesquiere Schweitzer created this Life Tributes page to make it easy to share your memories.

Marion Ghesquiere Schweitzer, passed in peace and went to be...