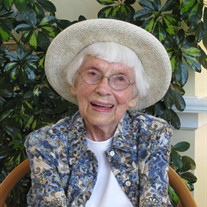 Traverse City - Marjorie E. Kladder, 99.9, of Acme, passed away on March 26, 2014 with family at her side. Marjorie was born April 30, 1914, in Flint to John and Anna Gleasure (Reek). She lived in Davison, MI before moving to Acme in 2004. Marjorie had to quit high school to work as a nanny during the depression. Always loving education she returned to school and proudly graduated from Mott High School in 1960. She went on to earn bachelor and master degrees from Eastern Michigan University. She taught 2nd grade for the Kearsley school district for 15 years. On December 7, 1935 she married Jacob Kladder and together they built a home in Davison. They had 54 wonderful years together. During WWII she worked at AC Spark Plug. In addition to teaching, Marjorie enjoyed traveling. She traveled to all 50 states and had a particular fondness for the mountains. After her husband passed, she extended her travels to include China, Turkey, Greece, Egypt and other European countries. But most of all, she loved her family. She was active in scouting where she became a den leader. She made sure her sons became involved with the church youth group, the YMCA, and many school activities. She was the organizer of all the family vacations and of all the renovations to the house. She was preceded in death by husband, Jacob Kladder; son, Ronald Kladder; mother, Anna Elizabeth Reek; father, John Henry Gleasure; sister, Millicent Valorea (Gleasure) Turrel; sister, Sylvia Lillian (Gleasure) Fuller; brother, Virgil Henry Gleasure She is survived by two children, Wayne J. Kladder (Ruthanne) of Traverse City, Douglas L. Kladder (Suzanne) of Colorado Springs; daughter-in-law, Jerianne Kladder of Columbus, Ohio; many nieces and nephews, and friends by whom she will be greatly missed. Memorial service will be held on what would have been her 100th birthday, April 30, 2014 at Hope Village in Acme, Michigan. Visitation is from 2:00 - 3:00 PM with service beginning at 3:00 PM An additional Memorial service will be held in the Chapel at Flint Memorial Park, on N. 9506 N Dort Hwy, Mt. Morris, Michigan at 2:00 PM on May 2, 2014. Donations in her memory may be made to the Grand Traverse Regional Land Conservancy; 3860 N. Long Lake Road, Suite D; Traverse City, Michigan 49684. (231) 929-7911 Arrangements have been handled by Reynolds-Jonkhoff Funeral Home. Please sign her online guestbook at http://www.reynolds-jonkhoff.com/obituaries/

The family of Marjorie E. Kladder created this Life Tributes page to make it easy to share your memories.