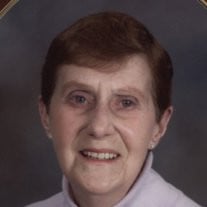 Traverse City-Marjorie W. (Marge) Lerchen, 80, a long time resident of Traverse City, died early Saturday morning, July 20, 2013, at Munson Medical Center following a brief illness. Born on March 10, 1933, in Detroit, she was the daughter of the late John and Winifred (Bertrand) MacDonald. On August 27, 1955 in Detroit, She married Richard G. "Dick" Lerchen. Marge retired from Munson Medical Center. She was a long time member of St. Francis Catholic Church, and participated at the Saturday afternoon four o'clock mass, where she received much comfort and solace. Often she was seated with her friends in the third pew at the right front of the church. Marge enjoyed living at Bay Ridge, where she had many wonderful friends. She was always dispensing sunshine and joy. She is survived by her six children, Catherine (Phil) Anderson of Maple City, Nancy (John) Hoadley of Traverse City, Jeanne (Jim) Donnellon of Sterling Heights, Patricia (Lance) Leach of South Boardman, Charles (Pam) Lerchen of Traverse City and Frank (Mary) Lerchen of Empire; 15 grandchildren; two step grandchildren; 13 great grandchildren; twin sister, Marilynn Swindlehurst; and many, many nieces and nephews. In addition to her parents, she was also preceded in death by her husband, Rickard G. "Dick" Lerchen, who died at the age of 67, on October 29, 2000; along with her three brother, John S. MacDonald, Richard B. MacDonald, CSC, Lawrence C. MacDonald. A Funeral Mass will be held at St. Francis Catholic Church on Tuesday, July 23, 2013 at 11:00 A.M. Rev. Kenneth Stachnik will serve as the presider. Burial will follow at Grand Traverse Memorial Gardens. For those planning an expression of sympathy are asked to consider the Munson Regional Healthcare Foundation- Canter Treatment Center. Envelopes may be obtained at the church. Kindly share you memories with the family on their on line guest book at www.reynolds-jonkhoff.com Arrangements were made with the Reynolds-Jonkhoff Funeral Home and Cremation Services.

The family of Marjorie W. Lerchen created this Life Tributes page to make it easy to share your memories.