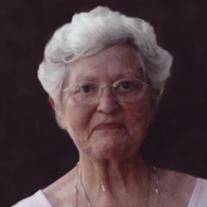 Marjorie M. Pifer, 78, of Traverse City passed away Friday, November 30, 2012 at Munson Medical Center in Traverse City. Marjorie was born on March 27, 1934 to the late John Everett and Luella(Henry) Speers in Owosso, MI. Marjorie entered into marriage with Allen A. Pifer on September 1, 1956 in New Lothrop, MI. Marjorie was an active and supportive member of Bethlehem Lutheran Church. She was on the Women's Synod, the church board as well as the WELCA. Marjorie was a dedicated RN working at Traverse City State Hospital, Osteopathic hospital and she retired in 1996 as nursing supervisor from Munson, where she worked for 20 years. Marjorie was a caring and supportive wife alongside her husband as he spent 35 years giving historical programs to children in schools and camps all over the state. She was an active member of DAR, DAV, Sons of the Union and volunteered at Interlochen Arts Academy. Marjorie is survived by her loving husband of 56 years, Allen A. Pifer of Traverse City, their children; Tonja (Timothy) Carlson, Todd (Joyce) Pifer, and Rev. Tamara (Nathan Stevens) Pifer, Daughter-in-law Judy (Dehl), ten grandchildren, sisters; Juanita Garcia and Alice (Edward) Sunderland, and eight great grandchildren. Marjorie was preceded in death by her son, Takis Pifer, one brother; Greel and her parents. Visitation for friends and family will be held from 4:00 PM until 7:00 PM on Tuesday, December 4, 2012 at Reynolds-Jonkhoff Funeral Home. Funeral services will take place at 11:00 AM on Wednesday, December 5, 2012 at the Bethlehem Lutheran Church in Traverse City, with Rev. Paul Busekist officiating. Grave-side committal services will be held in Zion Cemetery, Ogden Twp., MI at a later date. Flowers are from Pifer’s Greenhouse, Blissfield, MI. Memorial contributions may be directed to the Allen and Marjorie Pifer Family Endowed Scholarship Fund care of Northwestern Michigan College.

The family of Marjorie M. (Speers) Pifer created this Life Tributes page to make it easy to share your memories.