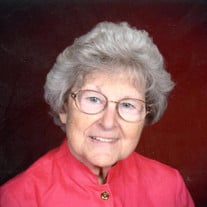 Marjorie Siefert, 86, of Williamsburg, passed away peacefully on Tuesday, August 11, 2020 at her home in Williamsburg after living gracefully and contentedly with dementia for 8 years. Marge was born on July 8, 1934 in Flint to George B. and Grace (Metcalf) Read. She grew up in Davison and attended Central Michigan University earning her bachelor’s degree in education. After graduation she taught home economics in Utica Community Schools, and enjoyed Travelling to New York, Colorado and Hawaii with her girlfriends. After meeting Al Siefert, a fellow teacher, at a party on election night 1960, they were married in the Methodist Church in Davison the following July. They settled down in Utica, moving to Washington Township after the arrival of their 2 daughters, where Marge continued to teach and enjoyed being a mother, friend and mentor to many. Marge retired from teaching in 1992 and following Al’s retirement in 2001, they moved to Traverse City to be closer to their cottage on Starvation Lake and to enjoy living in Northern Michigan all year. She became active in the Retired School Personnel and Central United Methodist Church. Marge was an amazing seamstress and prodigious baker. She is remembered fondly for her Christmas cookies. Quiet and kind, her generosity of spirit touched all who knew her. She is survived by her husband of 59 years, Al; her daughters, Julie (Steve Spanbauer) Siefert of Neenah, WI and Kathy (Paul) Weaver of London, England; and one grandson, José Luis. Marge is also survived by her brother, Richard (Joan) Read of Enterprise, FL and brother-in-law Larry (Jamie) Siefert of Mt. Clemens, MI as well as numerous nieces, nephews and friends. She was preceded in death by her parents, brother George Read, Jr. and sister Willa Mae Hagstrom. Throughout Marge’s entire journey with dementia she was surrounded by the unwavering love, support and care provided by her husband, Allan…for that we are eternally grateful. In addition, the family would like to thank Marge’s Heartland Hospice care team for the supportive services provided at her end of life. A celebration of Marge’s life will take place at a later date. Inurnment will be in the Columbarium of Central United Methodist Church in Traverse City. Memorial contributions to honor Marge’s memory may be directed to Central United Methodist Church, 222 Cass Street, Traverse City, MI 49684 or to Curative Connections’ Memory Café at 2900 Curry Lane, Green Bay, WI 54311 or online at www.curativeconnections.org.

Marjorie Siefert, 86, of Williamsburg, passed away peacefully on Tuesday, August 11, 2020 at her home in Williamsburg after living gracefully and contentedly with dementia for 8 years. Marge was born on July 8, 1934 in Flint to George B. and... View Obituary & Service Information

The family of Marjorie Louise Siefert created this Life Tributes page to make it easy to share your memories.