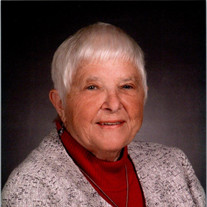 Marjorie Cordelia Winowiecki, 87, of Cedar, passed away February 11, 2022. She was born July 1, 1934, in East Jordan, daughter to Lyle and Beatrice (Batterbee) Keller. Marge trained and received her certification as a Registered Nurse from Sparrow Hospital in Lansing in 1955. It was during her student nurse training at Traverse City State Hospital where she met her husband Ted and spent 55 extraordinary years with him, until his death in 2008. Her career took her to many hospitals around Michigan, but she and Ted settled in Traverse City where she worked at the Thirlby Clinic for 35 years. Her natural talent and skill in nursing made her much beloved and popular in the community. Her generosity extended to her work for Immaculate Conception Catholic Church, where she spent years as Sunday School teacher, ran Friday bingo with Ted for over a decade, was a Eucharistic Minister, served on the Funeral Luncheon team and was a volunteer helping in the rectory office. Marge and Ted shared a love for travel, and after trips to the Holy Land, Egypt, and Rome. They spent their winters RVing and seeing the country. At home, she loved to cook and bake – most especially chocolate chip cookies for her grandchildren and great grandchildren, who were among her greatest joys in life. She is survived by children Cynthia Winowiecki, Steven (Leanne) Winowiecki, Mark (Jean) Winowiecki, and Anne Marie (Frank) Smith; brother Vale Keller; numerous grandchildren, great-grandchildren, nieces, nephews and extended family members. Marjorie was welcomed to heaven by her parents; husband Theodore “Ted” Winowiecki; three brothers and sister. Mass of Christian Burial will take place 11 AM Friday, February 18, at Immaculate Conception Catholic Church. Visitation will be held one hour prior to Mass, and from 5-7 PM, Thursday, February 17, at Reynolds-Jonkhoff Funeral Home. The holy rosary will be prayed at 5 PM. Interment will take place at a later date in Grand Traverse Memorial Gardens. Please direct memorial contributions to the Immaculate Conception Catholic Church Food Pantry. Memories and condolences may be shared on Marge’s tribute page, www.reynolds-jonkhoff.com

Marjorie Cordelia Winowiecki, 87, of Cedar, passed away February 11, 2022. She was born July 1, 1934, in East Jordan, daughter to Lyle and Beatrice (Batterbee) Keller. Marge trained and received her certification as a Registered Nurse from... View Obituary & Service Information

The family of Marjorie Cordelia Winowiecki created this Life Tributes page to make it easy to share your memories.