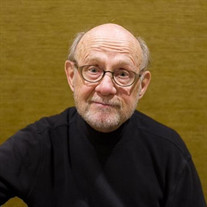 Mark Gustafson, resident of Traverse City, Michigan, died on August 19, 2021. He was born to Eveline and Marcus Gustafson in Muskegon and grew up in Whitehall. He inherited a sharp wit and a love of music from his father; from his mother he got a steadfast moral compass, sensitive heart, and respect for all people. He graduated from Whitehall High School, attended Western Michigan University, and earned his Bachelor’s Degree from Augustana College in 1961. He earned his Master’s Degree in English Literature from Eastern Michigan University. He taught high school English at Rock Island High School and then moved to Michigan to teach at Birmingham Groves. He then taught English writing and literature at Muskegon Community College for more than two decades. There, he introduced women’s literature and authors of color into the college’s English curriculum and brought many of those authors to the college. He believed it was important for students to engage in critical thinking and received an award for promoting intercultural awareness within the college community. He retired in his early 50s but remained active. He served as a substitute teacher at the Adult Work Center in Traverse City and taught English Literature courses at Northern Michigan College and Interlochen Arts Academy. He also became a member of the Unitarian Universalist Congregation of Grand Traverse (UUCGT), where he found an intellectual and spiritual community that gave him purpose and meaning. He served as President, sang in the choir, served on several committees, started the Men’s Group and the Reading Group, gave numerous Sunday services, and organized an all-gender softball team. After organizing trips to the Toronto International Film Festival for many years, he started the UUCGT Film Festival for Traverse City locals, bringing fine, independent films to Traverse City in the years before the Traverse City Film Festival began. He had a long history of work on matters of civil rights. In efforts to promote anti-violence and anti-subordination, he lectured to thousands of junior high and high school students throughout Northwestern Michigan through Hate Free TC. He loved to garden, particularly with friends. He was a lifelong lover of books and films and found nothing better than bringing groups of people together to discuss provocative works. He never completed that novel he intended to write when he retired early but he leaves behind several children’s books, many short stories, and a large collection of poems. Above and beyond all else was his love of family. This family included his wife, Solveig, to whom he was married for 59 years. It also included his children Kaaryn and Drew, his daughter-in-law Nicole, and his grandchildren Anneke and Maverick. He always enjoyed his close relationships with and his niblings Robin, JeriAnn, Mark, and their children. He was preceded in death by his parents, sister Julie Sutherland, and cousins Holmes and Ken Beausang. In lieu of flowers, memorial contributions may be directed to Safe Harbor, the UUCGT, or the Traverse City Film Festival. The memorial service will be held on Wednesday, December 22, 2021 at 1:00 pm at the Unitarian Universalist Congregation of Grand Traverse. (6726 Center Rd., Traverse City, Michigan - 947-3117). Mark was always peeved by speakers who talked too long or who cried; anyone who wants to speak at the memorial should keep that in mind.

Mark Gustafson, resident of Traverse City, Michigan, died on August 19, 2021. He was born to Eveline and Marcus Gustafson in Muskegon and grew up in Whitehall. He inherited a sharp wit and a love of music from his father; from his mother he... View Obituary & Service Information

The family of Mark Harold Gustafson created this Life Tributes page to make it easy to share your memories.