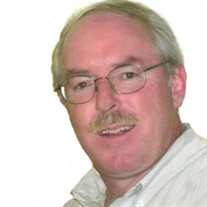 Mark Wade Rongey, 55, of Traverse City passed away peacefully on Tuesday, February 20, 2018 at his home, after a long and courageous battle with pancreatitis. Mark was born on February 4, 1963 in Traverse City to Donald and Dorothy Jean (Broad) Rongey. He was married to Bonnie Carrier on October 11, 2012. He had been employed as a tool and die maker with Grand Traverse Stamping. Mark raised two sons, instilling them with values above the norm. He also raised a leader dog that graduated and became a guide dog for a man in Florida. Mark could “run like the wind,” he lettered with the track while only a sophomore. He shot his first buck at daybreak on opening day at the age of 14. He won his very first sanctioned motorcross race and place second in a tractor pull. Mark was mechanically skilled he could correct, repair and rebuild anything. His garage was meticulous, a sanctuary for him, his tractors and his lawn mower, “Helga.” He drove his John Deere across the “Mighty Mac”. Mark was an Almanac of information he retained various facts about sports, the weather, history and gardening. He once grew a pumpkin weighting 720 pounds as well as a plethora vegetables he shared with family and friends. When his sons were born, Mark purchased bonds to finance their college educations. Mark was quiet man of joy to know, he was always supportive and a great provider. He was so very proud of his boys; Don, Paul and his dog Ernie and he loved them dearly. Mark is survived by his loving wife, Bonnie, two sons; Donald (Emilie) Rongey and Paul Rongey, a step-daughter Karlie (Tony) Clear, two grandchildren; Meredith Rongey and Jack Rongey. Also surviving are his mother; Dorothy Jean Rongey, two sisters and a brother; Peggy (Walter) Drabek, Leslie (Mark) Suitor and Chris (Kristine) Roush, as well as aunts, uncles, extended family and his faithful dog, Ernie. He was preceded in death by his father, Donald Wade Rongey and a granddaughter, Lillian Mae Clear. In accordance with Mark’s wishes cremation has taken place and a celebration of his life is being planned for this spring. In lieu of flowers, those planning an expression of sympathy may wish to consider a memorial donation to Mark’s grandchildren’s educational fund c/o Donald Rongey, 305 Sixth St. Traverse City, Michigan 49684. Please feel free to share your thoughts and memories with Mark’s family at www.reynolds-jonkhoff.com. The family is being cared for by the Reynolds-Jonkhoff Funeral Home and Cremation Services.

Mark Wade Rongey, 55, of Traverse City passed away peacefully on Tuesday, February 20, 2018 at his home, after a long and courageous battle with pancreatitis. Mark was born on February 4, 1963 in Traverse City to Donald and Dorothy Jean (Broad)... View Obituary & Service Information

The family of Mark Wade Rongey created this Life Tributes page to make it easy to share your memories.