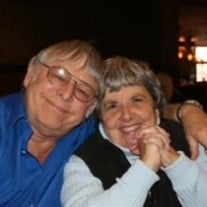 Marlene Kaye (McCuen) Curtiss 10/12/1941 — 3/31/2022 Heaven gained another angel, and we here on earth lost one of the great ones. Marlene became a little sister to brother Gene in Manistee, Michigan, on October 12, 1941. She was born to proud parents Clark and Marguerite (Petrequin) McCuen. In high school, Marlene was known for her love of singing, and she and her high school sweetheart, Garry Curtiss, were in high school musicals together. She married her sweetheart on December 31, 1959, so, as they always joked, they could get the tax write off. Marlene became a church secretary at Asbury United Methodist Church, just down the road from her home, shortly after moving back to Traverse City from Kentucky. It was there that she found her niche and God's purpose for her life. She stayed in the role of church secretary for 38 years, breaking in at least six ministers during her time there. She also sang in the church choir. Marlene was such a people person, she spent most of her time visiting and listening to others, taking her work home many days just to get it done. But she wouldn't have had it any other way. People were special to her, and she had a way of making them feel important and loved. She walked to work for 38 years, and many times you would see her pulling her little red wagon behind her filled with work, treats, or gag gifts. She was always trying to have fun at work and make people smile. The joke during the winter was that Marlene could slide down the street on a cookie sheet if the roads were too slippery to walk. She loved to walk around her neighborhood, and not only did the neighbors know her, but their dogs did too, as she always had a spare dog bone in her pants pocket to hand out to any furry friends she met along the way. Marlene is preceded in death by her father Clark, her brother Gene, her mother Marguerite, as well as her grandparents, many aunts, uncles, cousins, and wonderful friends. She is survived by her husband Garry, son Shawn (Lisa), daughter Cammie (Trent) Freeman, sister-in-law Annabelle (Gene) McCuen, nieces Valerie Blackburn and Candace (Charles) Weems, nephews Doug (Ann) McCuen and Gregg McCuen, and grandkids Collin, Kylie, Jessica (Jacob) and Nathan, as well as many grand-fur-babies. Per Marlene's wishes, there will be no funeral service. She would like for those who knew her to remember her by her smile and friendship. Memorial contributions may be directed to Hospice of Michigan or an animal shelter in her honor.

The family of Marlene Kaye Curtiss created this Life Tributes page to make it easy to share your memories.