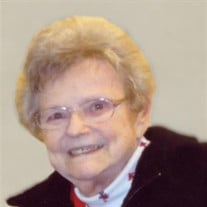 TRAVERSE CITY - Marsha Joan (Frederick) Schell, 81,of Traverse City, formerly of Big Rapids died Friday, December 8, 2017 at Orchard Creek Assisted Living in the loving care of the staff, her children nearby. Marsha was born on March 1, 1936 in Sandusky, MI to the late Jacob and Lena (Rump) Frederick. Marsha graduated from Sandusky High School in 1954, and shortly thereafter she married her high school sweetheart Paul Douglas Schell on August 31, 1957. They both attended college at Central Michigan University, where Marsha graduated with a Bachelor of Science Degree in 1958 and then went on to receive her Masters Degree in Speech Pathology in 1961. After a short time in Shepard, Michigan, Marsha and Paul settled in Big Rapids in 1963. Originally serving students in the local and regional elementary schools of the Mecosta-Osceola Intermediate School District, she later spent a short stint in administration as Supervisor of Special Services under former Traverse City ISD superintendent Richard Asiala, but quickly returned to her greatest joy- her students, focusing on those with special needs. She took great pride in every student’s accomplishments, and regularly took them downtown to shop or to her home to swim. She loved to dress as Mrs. Claus for their annual Christmas party. Marsha was honored with the Speech Pathologist Program of the Year award for the State of Michigan in 1992, before retiring in 1994 after 36 years. Marsha loved spending time in her yard and by her pool, at Schell’s Reservation, in Indian Village Estates, enjoying many happy hours entertaining friends and family, including her husband’s softball team, with gallons of red rose and buckets of Slush. The youngest of 12 siblings, she invited them all to her home in 1975 for a reunion, the family not having been together since the death of their father 29 years earlier. Relatives came from across Michigan, as well as from Texas, Ohio, Maine, Pennsylvania and California, many meeting each other for the first time. The 3-day pool party went on to become a cherished tradition alternating between Schulenburg, Texas and Big Rapids for many decades. An active member of St. Paul’s Campus Parish she served as Eucharistic Minister, Lector, RCIA chairperson, CCD teacher, Church Council member, and preparer of student suppers on Sunday evenings for Ferris Students. She volunteered at Mecosta County General Hospital and was treasurer of the Big Rapids chapter of Delta Kappa Gamma, the International Honor Society of Women Educators. After retirement Marsha enjoyed travel with her sister Madelyn and friends Susan and Dave Krug, Father Loc Trinh and Father Tom Page visiting locations across Europe and the Carribean, with a special trip to Rome while Father Loc was based there. She treasured time spent with her children and grandchildren, making each and every holiday a special event full of decorations and gifts. She and Paul moved to Traverse City in 2009 . Surviving Marsha are her children, Dr. Jennifer Schell (Dan) Bonifacio of Traverse City, Scott Schell of East Bethel, Minnesota; and grandchildren, Jake, Josh, and Delaney Bonifacio, and Marie and Benjamin Schell; multiple nieces, nephews, great –nieces and –nephews, many more extended family and friends. Marsha was preceded in death by her parents Jacob and Lena, her husband Paul, and her siblings: George, Mary (Berger), Anne (Money), Max Paul, Helen (Woods), Jack, Robert, Joseph, Jean (Weber), Madelyn (Schrader), and John. Visitation will take place on Sunday December 17, 2017 from 5-7pm at the Reynolds-Jonkhoff Funeral Home. A rosary will be prayed at 7pm with open sharing to follow. A Mass of Christian Burial will take place Monday December 18 at 11:00 at Christ The King Church with visitation and greeting from 10-11am. Father Raymond Cotter will officiate. Marsha's final resting place will be with her husband at the Acme Township Cemetery. In lieu of flowers memorial contributions may be directed to Habitat for Humanity, because she so cherished and lovingly cared for her own home, and would want others to have a place to call their own. Kindly share thoughts and memoires with Marsha’s family at www.reynolds-jonkhoff.com. The family is being cared for by the Reynolds-Jonkhoff Funeral Home.

The family of Marsha Schell created this Life Tributes page to make it easy to share your memories.