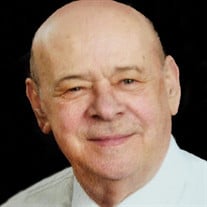 GRAND RAPIDS – Martin “Bud” Seaborn Lawrence, 88, of Traverse City, MI passed away Thursday, May 13, 2021 at home in Grand Rapids, MI. Bud was born to the late Seaborn and Gladys (Martin) Lawrence on March 4, 1933 in Detroit, MI. He grew up in the Detroit area and attended Mackenzie High School. On August 23, 1952 he married Janet Louise Cook in Detroit. Bud honorably served our country in the United States Army during the Korean War. Bud was a life long graphic artist for both work and pleasure. Initially he worked in styling departments for Ford and GM. He then started his own businesses. He was the co-owner of Koenig Lawrence Advertising and owner of Nova Art Studio based in Traverse City, MI. He enjoyed building and flying model airplanes, and spending time with family and grandchildren. He was a member of St. Francis Catholic Church prior to moving to Grand Rapids. Martin is survived by his daughters; Karen Leppek and Ellen (David) Koenig; eight-grandchildren, Nicolette and Kyle Leppek, Jason Lawrence, Andy, Tim, Anna, John Paul and Elizabeth Koenig, and his brother, John (MaryAnn) Lawrence. Martin was preceded in death by his wife, Janet and parents, Gladys and Seaborn Lawrence. A Mass of Christian burial for Martin will take place at 1:00 PM on Thursday, May 20th, 2021 at St. Francis Catholic Church with a visitation beginning at 12:00 PM. Father Don Geyman will preside. Martin will be laid to rest at Oakwood Cemetery immediately following the mass. For anyone that would like to attend there will be a celebration of Bud's life at Sayler Park in Williamsburg at 11:00 am on Saturday, June 26, 2021. In lieu of flowers the family asks that memorial contributions be direct to the Alzheimer’s Association, 921 W Eleventh St. #1W, Traverse City, MI 49684.

The family of Martin "Bud" Seaborn Lawrence created this Life Tributes page to make it easy to share your memories.