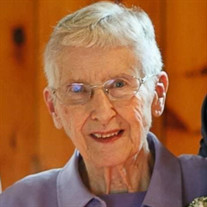 After lunch on September 23, 2021 Marva Iris Stevens laid down for her afternoon nap and passed away in her sleep. Exactly the way she hoped to go to Heaven. Marva was born October 14, 1923 in Muskegon, Michigan to the late Ira Herman and Hattie (Vos) Banninga. She grew up in there and graduated from Muskegon Central High School. In the eleventh grade she met the love of her life, her husband to be Jack Stevens. Three years later they were married on August 19, 1943. After WWll they lived in Muskegon until they moved to Traverse City in 1950. Marva loved the Lord. In 1951 she was a charter member of Faith Reformed Church where she worshipped and shared her talents well into her nineties. Marva was a wonderful cook and was always inviting people to their home, or delivering a home cooked meal to a shut-in. She loved to bake cookies and brownies to share at church during “coffee time”. She enjoyed her musical talents by leading a children’s choir, as well singing in an adult choir. She was always willing to do whatever needed to be done at church. Marva enjoyed her children and grandchildren. The more they were around, the better. She especially liked the chaos at the cottage on Cat Head Bay when the kids, grandkids, their friends, and dogs where all playing on the beach and in Lake Michigan. The cottage was a special place for creating memories as was a the traveling she and Jack did as they crisscrossed the country visiting national parks. Two of her talents were knitting and sewing. She knit sweaters, scarves, hats, and blankets for her children, grandchildren, gifts to friends and as gifts that were given thru a Bundles of Love ministry at Faith Reformed Church. All gifts of love. Her sewing skills matured turned into a love of quilting during her more mature years. She made many friends thru quilting and enjoyed spending time working with Fellowship Quilters to make quilts for Habitat for Humanity Homes. When she could no longer quilt, she enjoyed reading, and sharing books with friends. Marva is survived by her son Ronald (Nancy) Stevens of Traverse City, Daniel (Carol) Stevens of Troy, and David (Sue) Stevens of Grand Rapids; grandchildren John (Laurel) Stevens, Andrew (Sarah) Stevens, Kristin Stevens, Karin (Brian) Burin, Sandra (Brian) Pettilli, Nathan Stevens; and great grandchildren Elisabeth, Henry, Luke, Owen, Kalani, Sarah, and Peter. She is also survived by her brother Paul H. Banninga of Carmel, Indiana; and Dick and Edna Stevens (brother and sister-in-law) and their children Lori, Chuck, and Dale. She was preceded in death by her parents, beloved husband Jack, and her sisters Lenora Hesselink, and Genevieve Abbring. Marva’s family is very grateful for the compassionate care and love she received from her church family; and both Traverse Manor, and the Grand Traverse Pavilions. Thank you for being family to her during this Covid 19 pandemic. There will be a family graveside service on October 15, 2021.

After lunch on September 23, 2021 Marva Iris Stevens laid down for her afternoon nap and passed away in her sleep. Exactly the way she hoped to go to Heaven. Marva was born October 14, 1923 in Muskegon, Michigan to the late Ira Herman and... View Obituary & Service Information

The family of Marva Iris Stevens created this Life Tributes page to make it easy to share your memories.