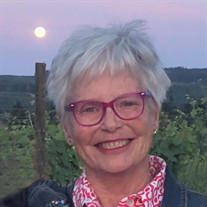 Mary Ann Abbott, 67, of Old Mission Peninsula passed away April 18, 2020 at the Munson Hospice House. Mary Ann Abbott was born on October 5, 1952 in Saginaw on a crisp sunny fall Sunday, as her mother was fond of telling her. A tumultuous marriage that lasted until they were into their late eighties, she was the daughter and first child of Dorothy Cranmore Abbott and Frank Peter Abbott who predeceased her. A brother, Brian Joseph Abbott was born five years later and they maintained a close relationship their entire lives. Her brother Brian survives her. Mary Ann Abbott attended Catholic Schools in Saginaw, graduating from St. Stephen's High School in 1970. She attended Delta College and Saginaw Valley State University graduating with a B.A. in 1974. Later she attended University of Michigan Business School for classes towards her Master's Degree. In 1975 Mary Ann married Matthew A. Dambro. This marriage led her to Binghamton, New York and then to Ann Arbor when she began a finance career with Ann Arbor Bank & Trust. She returned to Saginaw and continued her banking career with Second National Bank. Her marriage ended after 9 years. Mary Ann continued in her banking career until she was hired away by St. Mary's Medical Center to supervise their collections department. After working there for a few years Mary Ann began a staffing company that specialized in supplying bank staff. "My Time" continued to operate for about ten years before it was sold. Always active in the community Mary Ann volunteered with the West Saginaw Civic Association, Old Saginaw City, Junior League of Saginaw County, City of Saginaw Committee to assist small, minority and women-based businesses. Fate and a client's business brought Keith (Lanny) Leak through the doors of the Second National Bank office, where he was immediately smitten with Mary Ann. They eloped on the first day of Spring 1985 and began a life of quality, adventures and respect. This marriage brought with it Lanny's three children who survive; Andy Keith Leak of Los Altos, CA; Rebecca Sue (Matthew) Ralston of Lafayette, CO and Sarah Ellen (Scott) Holdeman of Golden, CO. These children were kind and accepting from the first day they met. They brought joy to her life and helped make up for the fact that she did not have children of her own. It was truly wonderful and she was most grateful. Seven grandchildren helped continue the love and laughter; Megan Leak, Connor Leak, Simon Leak, Ellen Ralston, Sam Ralston, Anna Holdeman and Grey Holdeman. It was always fun to be with those grandchildren!!! In 2002 Mary Ann was diagnosed with Lobular Breast Cancer. Following a year of surgery, chemotherapy and radiation Mary Ann and Lanny moved full time to their summer home on Old Mission Peninsula. It was a dream come true. Intertwined throughout Mary Ann's adult life was her love of and involvement with the Flat Coated Retriever. She enjoyed hunting with and training her dogs. She competed in the United State and Canada in conformation, obedience and field events. She competed at Westminster Kennel Club. She was involved with the Flat Coated Retriever Club of America, the AKC parent club and held the Board position of Membership Secretary since 2010. She was an active member in regional and state Retriever Clubs. She judged AKC Hunting Retriever Tests. Most importantly she had a country full of friends who shared her love and commitment to this breed. She cherished every one of them. She was particularly blessed to have become great friends with Dorothy Moroff, one of the original founders of the Flat Coated Retriever Society of America and resident of Old Mission Peninsula. In 2015 Mary Ann was diagnosed with Stage 4 Metastatic Breast Cancer. Despite being devastated by this reoccurrence, she continued to enjoy life, compete with her dogs and be grateful every moment for her friends and family. They truly helped her deal with each step of treatment, fear and anger. They shared relief of successful treatments and the terror or upcoming test results. They gave her strength. A private burial will take place. Due to the coronavirus, a celebration of life is planned for June 26, 2021. More information to follow then. Mary Ann requests that there be no flowers but rather a donation made for health research to the Flat Coated Retriever Foundation, c/o Mary Beth Bissig, 128 Glendale, Burlington, Iowa, 52601.

Mary Ann Abbott, 67, of Old Mission Peninsula passed away April 18, 2020 at the Munson Hospice House. Mary Ann Abbott was born on October 5, 1952 in Saginaw on a crisp sunny fall Sunday, as her mother was fond of telling her. A tumultuous... View Obituary & Service Information

The family of Mary Ann Abbott created this Life Tributes page to make it easy to share your memories.