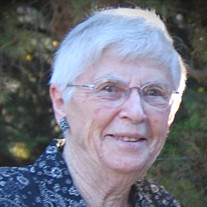 TRAVERSE CITY – Mary Ann Drury, 93, of Traverse City, died peacefully on Feb. 1, 2018. Her final days were filled with laughter and love as family and friends gathered around her bedside. Born March 22, 1924, Mary Ann grew up in Niles, Michigan, the eldest of six children. She fondly recalled that time as being filled with music, reading, and the usual childhood pranks of an active and loving family. Mary Ann attended the University of Michigan, where she majored in physical education and was a member of Alpha Delta Pi sorority. While at U of M she met her husband, Richard Drury, of Ann Arbor, on a blind date. With WWII overshadowing campus life, the young couple appreciated the simple things and genuinely enjoyed each other’s company. It was a way of life they were to carry with them throughout their marriage. Mary Ann taught phys ed for a year in Wyandotte after college graduation, while Richard was in the Navy. When he got out, they were married July 11, 1946, in Niles. A few years later, Mary Ann’s dad purchased a winning raffle ticket and brought home a Cadillac. He sold the car and bought property on Rennie Lake, just south of Traverse City. The family built a log cabin, calling it CC-49 for “Cadillac Converted in 1949.” This special place brought together friends and family for decades to come. It’s also what led Mary Ann and Richard to move to Traverse City in 1953. The first half of their marriage was dedicated to raising seven children. Once the kids were grown, Mary Ann went back to work as a library media aide at Traverse Heights Elementary School for 10 years. She also served on the East Traverse Catholic Federal Credit Union Board, was a charter member of the Traverse City Branch of the American Association of University Women, and was active in Child Study Club and the Christian Family Movement. She enjoyed listening to children read their book reports in the library’s summer reading program, and also volunteered for the Grand Traverse Area Parkinson’s Support Group, Meals on Wheels, funeral lunches, and as a Lay Eucharistic Minister. She was a member of St. Francis Catholic Church in Traverse City and St. Kateri Tekakwitha Parish in Peshawbestown. With her inquisitive mind, Mary Ann loved to read. She also enjoyed playing cards, square dancing, and challenging her brother to a game of Scrabble. On football Saturdays, you could find her rooting for her alma mater with an encouraging “get ’em” shouted at the TV. She also enjoyed music of all kinds: marching bands and musicals, singing around the campfire on family trips, listening to Classical Interlochen Public Radio, and playing the piano. Rather than talking about her faith, Mary Ann lived it. She and Richard welcomed others into their home, including family, friends, unannounced guests, exchange students, and foster children with the belief that ‘when a guest comes, Christ comes.’ She enjoyed spending time with many long-time friends, especially her “bridge ladies.” She saw the positive in others and didn’t speak ill of any one. Rather than opinion or advice, she offered her presence and her service. She was generous with her laugh and steadfast in her love. A wise man once said, "I measure success by the good that we can give to other people. By how many people we can love and call friend, that we know love us, that we can show love to." By all accounts, Mary Ann led a most successful life. She is lovingly remembered by her seven children and their spouses Ann (Dennis Lautner) Drury, Marcia Limbocker, Margaret Drury, Sheila (Dan) Fox and Paula (Michael) McIntyre, all of the Traverse City area; John (Mary) Drury of New York; and Michael (Kim) Drury of Colorado; her brother and sister-in-law Victor (Bette) Grathwohl of South Haven; sister-in-law Mary Lou Grathwohl of Niles; 25 grandchildren; 30 great-grandchildren; many nieces and nephews; and countless friends. The family wishes to thank the many people who helped care for Mary Ann during her last years, and is especially grateful for Lois, Lorraine, Melissa, and Beth. Mary Ann was preceded in death by her husband, Richard (Dick) Drury, in 2004; parents, Marshall and Eva (Rayfuse) Grathwohl of Niles; siblings Margaret Bohner of Lansing, Elizabeth Vanderbeck and Joseph Grathwohl of Niles, and Fr. John Grathwohl of Kalamazoo; and son-in-law Christopher Limbocker of Traverse City. Friends may call Monday, Feb. 5, from 5 to 8 p.m., at St. Francis Catholic Church in Traverse City, where a prayer service will take place at 7 p.m. Visitation will be at the church on Tuesday, Feb. 6, at 10 a.m., followed by a funeral Mass at 11 a.m. with Fr. Robert Flickinger serving as celebrant. Memorial contributions may be made to your local public or school library, Heartland Hospice, or the charity of one's choice. Arrangements were handled by the Reynolds-Jonkhoff Funeral Home in Traverse City.

The family of Mary Ann Drury created this Life Tributes page to make it easy to share your memories.